The tooth fairy, Santa Claus and the Palestinian "right of return" . Some of these myths need to be addressed

From Aprils' Al Awda (Palestinian Right of Return) Convention:
This piece of "art" depicts their view of "Palestine" as an Arabic nation, from the "river to the sea", as symbolic a rejection of Jewish self determination as any. 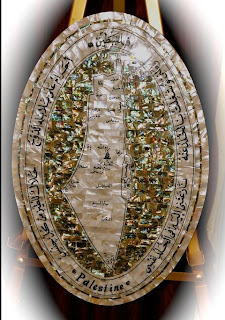 Al Awda is an extremist group that has always denied the right of the Jewish people to self determination in their ancient homeland. They claim " Palestinian refugees represent the longest suffering and largest refugee population in the world today. In 2005, there were approximately 7.2 million Palestinian refugees..."

Of course, Al Awda neglects to mention that what defines a Palestinian "refugee" is not that they are "indigenous" to the land of Israel- they simply had to reside in the land after 1946. They did not need to own land. They did not need to have their origins in the indigenous people of the region. And, unprecedented in human history, refugee status also extends to their descendants, a third and fourth generation that has never resided in this land..

Under UNRWA's operational definition, Palestine refugees are people whose normal place of residence was Palestine between June 1946 and May 1948, who lost both their homes and means of livelihood as a result of the 1948 Arab-Israeli conflict.
UNRWA's services are available to all those living in its area of operations who meet this definition, who are registered with the Agency and who need assistance. The descendants of the original Palestine refugees are also eligible for registration. When the Agency started working in 1950, it was responding to the needs of about 750,000 Palestine refugees.

Ziff in his 1938 book "The Rape of Palestine" documents the massive influx of Arabs into the Holy land, stating

"We should expect to find an exodus of Arabs from lands where Jews are settled. But exactly the opposite is true: it is precisely in the vicinity of those Jewish villages that Arab development is most marked. Arab Haifa, profiting from the Jewish boom grew from 1922 to 1936 by 130%, Jaffa by 80% and Jerusalem by 55%...In the vicinity of the Jewish villages Arab workers earn twice the wage paid in other parts of Palestine."

Dr. Rivka Shpak Lissak documents the same phenomenon on her website , unmistakably showing that most Palestinians in the Holy Land prior to Independence were recent immigrants.

Al Awda has been working in partnership with the "Free Gaza Movement" . Al Awda "activists" are planning to visit Israel en mass in the next few months as part of a project proposed by ISM leader Paul Larudee. Palestinians will fly on commercial flights to Ben Gurion airport in Tel Aviv airport and will insist on going to their non-existent "homes".

Because this is meant to function as a publicity stunt, it is hoped that Israeli border authorities will stop them upon arrival, place them in detention, and try to deport them. The "activists" all have a history of anti-Israeli activity, and hope to be turned away. They hope for a long drawn out court battle and have been advised to avoid El Al flights because of their strict security.

They will be carrying photos of random doors and random keys gathered from an Al Awda project chronicled here.

Santa Claus, the tooth fairy and the Palestinian "right of return". All myths. If you want to know the real goal of Al Awda- just look carefully at the convention participants 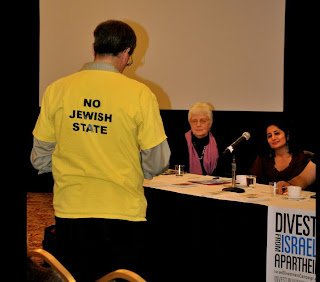 a second fleet or flotilla is stupid. the first one didnt get thru and the second one wont.It will be a propaganda war again in facebook twitter and youtubwe while people are suffering in gaza.They suffer due to bin laden like leaders who only want to manipulate their own people.As well the flotilla people are egoists. they want their moment of zen of fame to colaborate.But it wont help .Real help is to get rid of those arab leaders like kadafi hussein bin laden and in gaza also.A flotilla is fun isnt it,lets have a flotilla and scream at the israeli navy but the pple in gaza suffer and need new leaders.after israeli will open gaza to independence.

I just received an email from the jokers at Al Awda describing the "Nakba", the great Catastophe which befell the Palestinian people with the colonial Zionist invasion of Palestine.

The Jews were in the land for over 3500 years. What invasion? The starving emaciated refugees from Europe? The Jews from Arab lands fleeing murderous rage? The Ethipians ?

On the Other Hand said...

"Of course, Al Awda neglects to mention that what defines a Palestinian "refugee" is not that they are "indigenous" to the land of Israel- they simply had to reside in the land after 1946. They did not need to own land. They did not need to have their origins in the indigenous people of the region. And, unprecedented in human history, refugee status also extends to their descendants, a third and fourth generation that has never resided in this land.."

Please understand, I am proud to be a Jew and I support the effort to correct the misinformation the "Palestinian" cause has been promoting...but--perhaps you could restate the above argument.

You see, I have "only" resided in the U.S. since 1957 (I was born here). I do not own land (yes, a low-income Jew who can't afford to buy their home!). I do not have my origins in the indigenous people of the region (like millions of my fellow American Ashkenazis, my grandparents came here from Eastern Europe).

If this country became more aggressively anti-semitic or a civil war broke out and I had to flee, would you say that I did not qualify as a refugee according to your criteria? We must be careful to be fair and reasonable when we decide who is a legitimate refugee and who is not.

The Palestinians claim to be "indigenous" to Israel, but the reality were most are recent migrants to the land. The claims are simply not valid. How would you suggest resting this?

You have no right to control our land and we will take it back, by force if necessary. Fron the river to the sea, palestine belongs to me, you zionist scum!