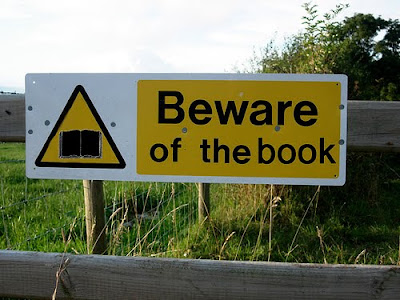 You don't have to burn books to destroy a culture. Just get people to stop reading them.
--Ray Bradbury

Via Virtual Jerusalem: A Scottish municipality has banned from its libraries books by Israeli authors and that were printed or published in Israel.

The West Dunbartonshire Council, consisting of towns and villages west of Glasgow, ordered new books by Israeli authors to be banned from the council's libraries, according to reports.

The ban reportedly was ordered after last year's raid by Israeli commandoes on a ship attempting to break Israel's blockade on Gaza that led to the death of nine Turkish nationals. The ban followed a decision made 2 1/2 years ago following the Gaza war to boycott goods produced in Israel. According to that law, the council and all its public bodies are forbidden to sell goods that originated from Israel.

We are only just beginning to sound the vile depths to which the delegitimization campaign against Israel is sinking. This sounds fine, now. Books may only be bought from countries with a right to exist...which would be all of them, except for Israel.

I'm making no excuses for the West Dunbartonshire Council. I don't care if they're vicious or well-meaning, ignorant or knowledgeable, they have set out to be part of the mechanism of destroying a nation.

Hat tip to Vicious Babushka, both for being one of the first people to bring this story to my attention, and for the Bradbury quote, which I would have never remembered.
Posted by BBJ at 5:17 PM

This raises alot of questions;

Are they going to burn "Israeli books"?

Are all books in Hebrew, "Israeli books"?

Does that include the Bible?

We don't have to drink Scotch do we???