Between 1948 and 1967, when Israel's Mount of Olives was under Jordanian control, some 40,000 graves were destroyed. The tombstones of this ancient cemetery, where Jews have buried their dead for over 2,000 years were used as paving stones for a hotel and for Jordanian army camps. During this period a new road was paved from the top of the Mount of Olives southward and the main road to Jericho was widened on top of graves.

Just last week, an unarmed Jewish Worshipper at the tomb of Joseph near Nablus in the West bank was killed, and the sacred site vandalized. 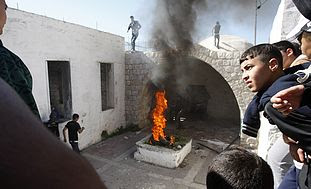 We are admonished not to "stand idly by" in the face of evil. Again, it is time for the Jewish community to mobilize, not for Israel, or for each other, but for our neighbors.

The Greater Vallejo Recreational District is about to desecrate a ceremonial and burial site sacred to the First nations of the Americas. Glen Cove is a sacred gathering place and burial ground that has been utilized by numerous Native American tribes since at least 1,500 BC. Today, Glen Cove continues to be spiritually important to local Native communities. It is located just south of Vallejo, California along the Carquinez Strait, a natural channel that connects the Sacramento River Delta to the San Francisco Bay. Glen Cove is known as Sogorea Te in Karkin Ohlone language.
The plan is to bulldoze a large section in order to install a parking lot, restrooms, picnic tables and trails, though there are similar facilities nearby. Representatives of the indigenous peoples have been holding an around-the-clock protest vigil at the site for 3 weeks, complete with tepee and sacred rituals.
Let's join them and show our support. After all, as Jews we know what it is to have our own sacred burial sites co-opted and desecrated . We can share our histories and stand in solidarity . All are welcome.
Bring seating and food if you so desire.
Sunday, May 8 at 2:00 PM at Glen Cove, Vallejo. See the Glen Cove website for details for directions and details. Call 510 548-9035 about carpooling

Why should the Jewish community get involved? This is about living Hillel's words "If I am not for myself, who will be for me? But if I am only for myself, who am I? If not now, when?"
Posted by Dusty at 10:03 AM

thank you for this amazing post! it really puts into context the natural alliance between native americans and jews, as well as the importance of sacred sites.

The Jews, who are affiliated with several congregations and social action groups in Berkeley, Calif., billed Sunday's visit as a cultural exchange timed to Mother's Day.

“We wanted to support the Native people trying to protect their sacred site and reflect upon similar experiences we have had with our sacred places,” said Wendy Kenin, who organized the event. “We hope that nurturing our natural alliance with them will help remind us of our own connections with the land of Israel and burial sites of our ancestors.”

Since mid-April, Native Americans have been maintaining a protest vigil at Glen Cove Waterfront Park, a 15-acre stretch of shorefront land northeast of San Francisco slated for development. Plans call for building a parking lot and other construction on top of a burial ground that has been used by several local tribes since 1500 BCE, according to University of California researchers.

Kenin says the Native Americans at the site told the visitors that “this is the resting place of our grandmothers and grandfathers.”

The Jewish visitors shared their religious beliefs regarding death and respect for ancestors, and explained why Jews visit their relatives’ graves.

Members of the Ohlone, Miwok, Pomo and other local tribes consider the development proposal a violation of their religious rights. They note it is the last of their local burial sites not yet paved over. Several clashes with police since the vigil began have ended without incident.