An apparent terror attack in Tel Aviv left one person dead and 17 injured as a 22 year old Arab, alleged screaming "Allah Akbar" plowed his truck into several cars in South Tel Aviv. Local police are showing more restraint, calling for an investigation before they label it a terror attack.The truck driver claims the incident was a "traffic accident"

And in other "Nakba" developments:

* In east Jerusalem, an 18-year-old Israeli man was injured when stones were thrown at his car in A-Tur, by peaceful non-violent demonstrators . A masked man in A-Tur was arrested after throwing a Molotov cocktail. 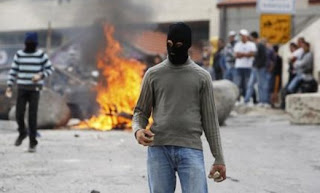 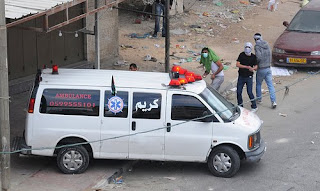 In Qalandiya rioters have hidden behind ambulances for cover while they continue to hurl rocks at Israeli security forces. Expect the haters to talk about the IDF targeting ambulances any minute now.

*And meanwhile, back at the Gaza Strip, the Erez Crossing is the scene of another riot, er, non-violent peaceful demonstration with hundreds of Palestinian peace activists hurling rocks (peace projectiles?) at Israeli forces.

i've been reading all day about all the rioting on virtually every boarder Israel has with it's charming arab neighbors. imagine what Israel would be dealing with if it gave up the West Bank year after year on May 14th. what? your shocked that the rioting would go on even after a palestinian state was established next to Israel?

Given that our local activist groups have had the cops called on them a couple of times for being middle-aged Zionists at close range (far too scary), I'm interested to learn about the possibility that you can be a nonviolent protester and have Molotov cocktails.