The Children of War--Two Pictures

If you spend enough time reading and writing and speaking about Israel and her neighbors, shocking pictures of children become old hat. Children in mock suicide belts, children dressed in miniature martyr garb, children gaily playing with cartoon characters that praise terrorists--these are shockingly common. So are the wrenching pictures of dead children, wielded by both sides of the situation, the children killed in air strikes on Gaza, the children, like the Fogel family's, murdered in the night by teenage terrorists making their bones.

But this photograph still stood out to me. 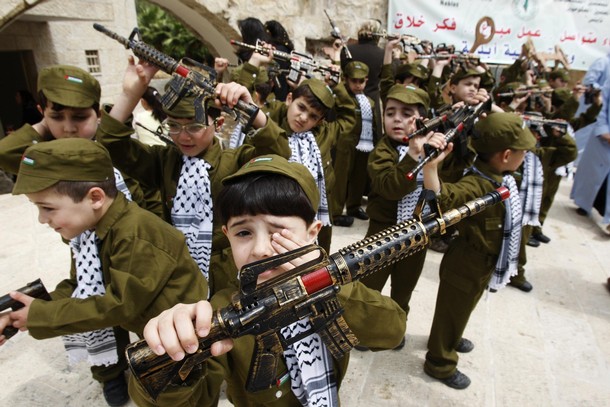 This was taken by Reuters. Their caption reads: Palestinian boys dressed in uniforms of Palestinian security forces and holding plastic toy guns take part during a rally marking "Nakba" in the West Bank city of Nablus May 15, 2011. Palestinians on Sunday mark the "Nakba", or catastrophe, to commemorate the expulsion or fleeing of some 700, 000 Palestinians from their homes in the war that led to the founding of Israel in 1948.

Well-fed, chubby-cheeked little boys, wearing matching little costumes and holding toy guns, march in the streets of Nablus, ready to grow up and become real soldiers in a war their leaders fully expect to end only with the complete destruction of Israel. What catches my eye here is how abnormally normal they look to my American eye...fidgety, sleepy, playful. Photos of these children will go into albums at home, and be looked back at fondly, like the pictures of me in my Brownie uniform that probably still lurk in one of my mother's photo boxes. 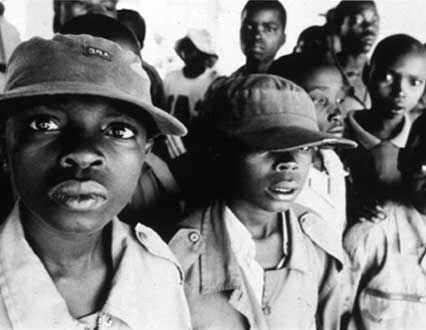 These boys are child soldiers in the hideously misnamed Democratic Republic of Congo. They're not well-fed, their uniforms were not ordered up for them by the neighborhood parade committee, and the guns they fire are real. Look at their watchful, controlled faces. Look at the thousand-yard stare on a child who should be worrying about his math homework in a sane world. These photographs will not be going into a photo album in a neatly swept apartment with food in the refrigerator and a television and computer in the living room. There is no home. There is no family.

If you run around accusing Israel of creating a humanitarian crisis 'beyond imagining', look at these photographs, and be ashamed. The Palestinians and their leadership have options beyond conflict, and have consistently rejected them. They have sent their children in harms' way, and justified the murder of Israeli children. Those little boys in Nablus could have a future of peace. Those little boys in the Congo could tell you that a chance like that is treasure you don't throw away.
Posted by BBJ at 12:30 AM

I enjoyed reading your blog. I must add that this sort of picture is nothing new in this area. You would be surprised if you would read their children books. Those are a lot more hateful than this picture.

On a different note, please add my blog to yours. My address is:
http://benjaminkahen.blogspot.com

I would also enjoy your feed back about my blog and the articles in there.