Palestinian reaction to the death of Bin Laden 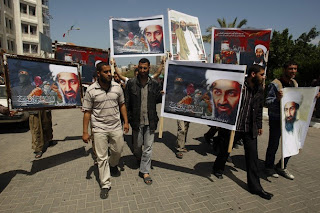 
The Palestinian Islamist group Hamas, which governs Gaza condemned the killing by U.S. forces of bin Laden and mourned him as an "Arab holy warrior"." Prime Minister Ismail Haniyeh condemned the U.S. operation that killed Osama bin Laden, claiming "this as a continuation of the American policy based on oppression and the shedding of Muslim and Arab blood.” He added “We ask God to offer him mercy with the true believers and the martyrs.”

An imam from the Al-Aqsa Mosque in Jerusalem vowed to take revenge over "the Western dogs" for killing al-Qaeda leader Osama bin Laden in Pakistan on Sunday.
In a YouTube video he refers to President Barack Obama, saying: "You personally instructed to kill Muslims. You should know that soon you'll hang together with Bush Junior. We are a nation of billions, a good nation. We'll teach you about politics and military ways very soon, with God's help," he vowed.
Posted by Dusty at 9:07 AM

it should also be noted that the armed wing of the fatah movement considered bin laden's execution a "catastrophe" according to the Jerusalem post. it seems that every time the palestinians don't get what they want it's a "catastrophe". what a bummer that any peace deals haven't worked out over the years so far i'm sure "palestine" would have been another nice country that would have been happy to provide room and board to bin laden.