From the Detroit Free Press

"Speaking today to a group of attorneys and judges at the law firm of Miller Canfield in Detroit, Justice Joubran said he lives in Haifa, where Muslims, Jews, and Christians live side by side in peace. Haifa “is a unique mix” of Jews and Arabs where “respect and tolerance” are shared values, he said. He added that metro Detroit’s religious diversity reminded him of his hometown."

He noted that in his neighborhood, Muslims, Jews, and Christians often share in the holiday celebrations of other religions.

“We in Israel pray every day for peace,” he said.

Justice Joubran touched upon how Israel allows Jews, Christians, and Muslims to decide some cases based on religious law. For example, Muslims in Israel have sharia courts that they can use in some cases, such as those involving divorce. The issue of sharia, or Islamic law, has become a contentious issue in the US, but in Israel, it’s allowed.

Tim Attalla, an attorney with Miller Canfield of Arab descent who helped organize the event, was recently named a board member of the American Association of Jewish Lawyers and Jurists, the group that sponsored Joubran’s trip.

Attalla said Justice Joubran was someone who is about “building bridges between folks.”

Justice Joubran has also served as governor of the Israel Rotary and has served as the chairman of the Zeltner Fund for legal research sponsored by Rotary Israel and Tel Aviv University. He has also taught at the University of Haifa. 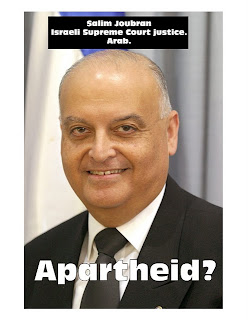