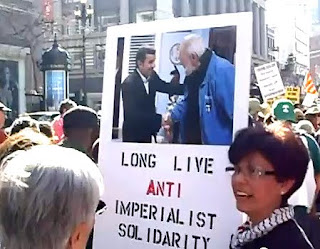 Anyone remember International ANSWER? Galvanizing Americans' ambivalence on the war in Iraq and Afghanistan, they originally attracted tens of thousands to their San Francisco rallies. But San Franciscans aren't stupid, and ANSWER was unmasked fairly quickly. San Francisco ANSWER, under the leader of Richard Becker is strongly rooted in the Workers World Party, a tiny vestigial organ of the Communist party.

The Workers World Party and Richard Becker, a party leader and leader of International Answer, have defended Saddam Hussein's regime in Iraq, Kim Jong Il of North Korea, Milosevic -- who is on trial at the Hague for war crimes -- and Chinese leaders who put down the 1989 "counter-revolution" in Tiananmen Square.

Like a lingering flu, ANSWER just won't go away, still trying to ride the coat tails of whatever social movement seems promising.

Keeping with their tradition of supporting dictatorial regimes, today ANSWER, along with the air plants of Code Pink co-sponsored a pro-Iran rally, taking a firm stand (sit down for this one) against sanctions directed towards the Islamic republic of Iran. Only at an ANSWER rally in San Francisco would you find a kaffiyeh clad women carrying a sign glorifying both Fidel Castro and Mahmoud Ahmadinejad. Cindy Sheehan was there, too, anxiously attempting to prove her relevance and extend her 15 minutes of fame. 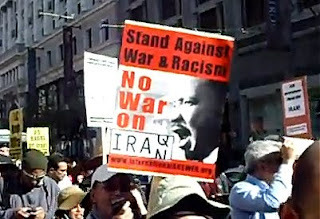 The dictatorial regime of Iran is denying one Holocaust while planning another. Iran routinely persecutes gays, minorities, and women, and supplies and trains its Hamas and Hezbollah proxies in their war against the Jewish state. It is a perversion for ANSWER to use the image of civil rights visionary Dr. Martin Luther King in support of the Iranian theocracy. Sadly, we expect no better from International ANSWER.

(thanks to dholsey for use of the photos)
Posted by Dusty at 7:44 PM

Speaking of becker, here he is on press tv (where else) being blamed for being an ADL “gatekeeper" by the communist, conspiracy nut and traitor Gordon Duff who runs the antisemitic website 'veterans today'.

Warning: Although hilarious, this video may cause IQ levels to plummet.

if you watch the video that the photo of imanutjob and castro came from you'll notice that those two women carrying the sign were really delighted that i recognized fidel castro in the photo. evidently people kept asking them all day who that was despite them being in a crowd of commies, anarchists, occupy people and other leftist nut jobs . it just goes to show you how stupid and uninformed liberal "progressives" of today are. their mostly a bunch of lemmings just trying to be cool and counter culture. just a bunch of narcissists pretending to be human rights advocates.

ANSWER is up to their old tricks. The San francisco chronicle reported "100" people at the march-that seems about right to me. ANSWER however sent out an email saying 600 showed up. In your sloppy wet dreams, Dickie boy. Only in your dreams