Ask yourself- What if it were you and your children in these cars? 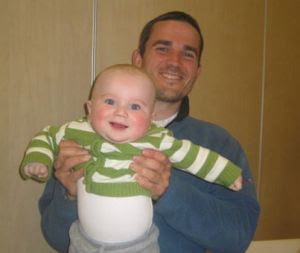 To label this unprovoked violence against Israeli civilians as "non-violent resistance" is deliberately deceptive and manipulative. This is precisely the act that lead to the death of 25 year old Asher Palmer and his infant son Yonatan.

Asher Palmer and Yonatan were killed in a terrorist attack after Palestinians threw rocks at their car, causing it to overturn on a highway near Kiryat Arba. The incident was originally reported as a traffic accident.

"Arutz Sheva has obtained a document detailing findings from the scene of the crash. Among the evidence that at first failed, for unknown reasons, to convince police that terrorists may have been involved: a hole in the front windshield of the car, a massive rock found in the front seat with human blood on it, a tear in fabric of the steeling wheel cover and dust indicating a blow from the rock, and damage to Asher Palmer's face suggesting an impact unrelated to the crash.

The autopsy and a CT scan of Asher Palmer's face showed evidence of facial fractures caused by a rock."
Posted by Dusty at 9:13 AM

I feel bad for Isreali's Like this one, being hated just because of your racist colonial regime, of child killing, land stealing, International law breaking murderers.
Must be tough being isreali....