Did a Global March to Jerusalem Organizer Solicit violence against Local Peace Activists?

Truth, its been said is stranger than fiction.

Our story so far.
Gilad Atzmon is known as much for his virulent anti-Semitism as his music. He was scheduled to appear in Oakland this evening at 7:30. Human rights activists led by our friends at San Francisco Voice for Israel organized a vigil to show that Oakland and the entire Bay Area stand united against hate speech.

Alarmed by the presence of an anti-hate vigil at his pro-hate event, local anti-Israel activist Deppen Webber solicited "security" volunteers on Twitter from the Occupy Oakland anarchists. Then the threats began.

(thank you to everyone who brought this to our attention) 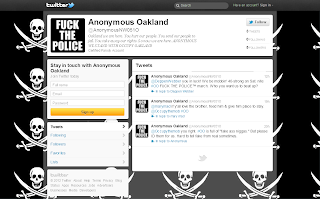 Yep. Anarchists to Deppen "Who do you want us to beat up?" 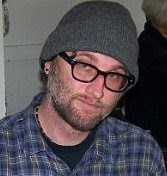 Deppen Webber. Member of "Jewish" Voice for "Peace". Member of the International Solidarity Movement. Organizer of the Global March to Jerusalem. Was Deppen Webber soliciting thugs to harass, intimidate and attack peaceful protesters? Just something to think about the next time the ISM tells you that they believe in "non-violent" resistance.

The story continues. Apaprently there is a strong rumor floating around that Gilad Atzmon fundraiser was cancelled. They'll blame the "zionists"- they always do. But we know- the real reason was that almost no advance tickets were sold for this event.

No, the event was not cancelled. The event was ultimately held at the Islamic Cultural Center, on Madison Ave in Oakland.
As people approached the Arts center, they were handed a flyer that read:

On Feb 6 we reserved Annex A100 for Feb 25 event featuring anti-etc..... (insert boilerplate anti-Israel propaganda here)
On Tuesday Feb 22 the Anti-Defamation League" [ADL] issued a press release denouncing Gilad Atzmon and our scheduled and advertised program at MCCA. the ADL is notorious for their spying operations against North American activists who fought apartheid in South Africa and Israel. In 2003 a public acknowledgement of their spying operation was front page news in the SF Chronicle as they lost a civil liability case.
Yet ADL and the 1% have clout.
One day after the ADL press release denouncing our program and identifying MCCA there was suddenly a "problem" with our room reservation at MCCA. 48 hrs before our event we were informed that we would have to reschedule because we did not have the proper "permit". Contacts with senior management overseeing MCCA took place the next day Friday Feb 24 but resulted in no reversal of this outrageous censorship. A series of lame falsehoods was offered by MCCA management. Obviously they cannot say the real reason for the abrupt and sudden finding of a problem.
We do not know if it was through bribery or threats but one way or another ADL and its supporters corrupts the integrity of Oakland Parks and Recreation which manages the Malonga Casquelourd Center for the Arts. The 1% has again demonstrated its influence and insidous power.
Shame on you, MCCA and Oakland Parks and Recreation management....."

The Gilad Atzmon dog and pony show at the Islamic Cultural center of Oakland began 40minutes late, and was attended by approximately 2 dozen people.
Posted by Dusty at 3:17 PM

that deppen webber moron was at the gilad aztmon thing tonight not too mention numerous other anti-Israel stuff i've been to. at Israel in The Gardens last year i corrected him about Jews not being a race for which he replied, ok, well what's a Jew?". no joke, that tells you something about what kind of people belong to JVP. you can see that exchange i had with him on Youtube. a key "palestinian thugs" word search in Youtube will take you to the video.