America Israel Racing was formed to promote awareness of and supportfor Israel, the only true democracy in the Middle East.

"We hope to educate Americans on the importance the United States' relationship with Israel through exposure provided by one of the largest spectator sports in the world - NASCAR. With the support of like-minded individuals, AIR will spread its message of American Israeli support throughout the entire 2012 NASCAR Sprint Cup Series and beyond"

And what a message it is! 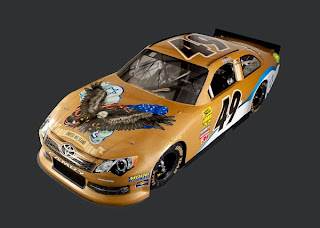 From the America Israel press release:

With under a month to go before the green flag drops on the 2012 NASCAR Sprint Cup Series, America Israel Racing (AIR) has unveiled its unique paint scheme for the No. 49 Robinson-Blakeney Racing Toyota that will be driven by JJ Yeley at the Daytona 500.
Inspired by AIR’s mission of promoting the importance of America supporting Israel, the design prominently displays both the United States and Israel flags as well as a striking image of a bald eagle holding both nations’ flags in its claws and an olive branch in its beak on the hood.
“We wanted to ensure our car design was not only eye-catching, but properly conveyed the mission and values of America Israel Racing,” said AIR co-founder Rich Shirey. “The eagle in particular contains a great deal of symbolism – it has a determined look on its face, because we are determined to voice the importance of America’s support of Israel." 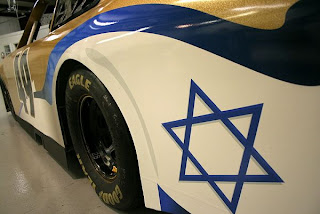 Friend them on facebook.com AmericaIsraelRacing
Follow them on twitter.com/AmIsraelRacing
Posted by Dusty at 1:51 PM

im a proud american and even prouder to see u stand for israel more americans need to remenber that israel stood for us in our fight to be a free nation i have never been into raceing but i cant wait to see u race for god and true princples i love ur paint job on the car just perfect!!!!!! im looking forward to seeing my frist nascar race .sandra bedenbaugh Holly Hill s.c

Thank you America Israel Racing for standing up for Israel. Sadly enough, in Our United States of America, a nation founded on the principles set forth by the everlasting G_d of Israel, many, too many, do not share these higher values and therefore add to Israel's many burdons. I volunteered in the Israeli Defence Forces because it was/is what I can do for the beloved Jewish State, and AIR proves the greatest sport in America and its millions of fans stand behind Israel and the Jewish people. In a time in our great nation, when, may G_d forgive us, our leaders are not making us as proud as we should be, (but will again one day), America Isrel Racing team make me PROUD to be an American. Thank you, again. Most Sincerely...Ken