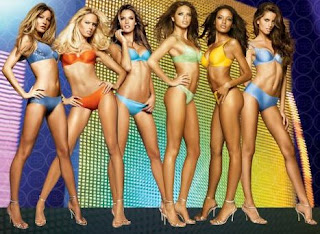 For years, I've gone through the tables at Victoria's Secret and bought all of the cotton panty styles labeled "Made In Israel". Now, my cousins in Jerusalem will be able to do the same without coming over for a vacation:

Victoria Secrets is coming to Israel: The famous Lingerie, clothes and perfume brand will be sold in Israel through duty free enterprise, James Richardson. The first two stores will be significantly smaller than the American model of large stores.

Negotiations for the brand’s franchise have completed and negotiations between franchising enterprise and the Israel Airport Authority have begun. The planned stores will span 100-120 square meters, and will be located inside and outside the airport’s duty free compound.

According to estimates, about 300 of the 2,000 items the brand line’s carries will be featured in the stores, especially those featured in its beauty line: Beauty products such as perfumes, soaps and lotions are becoming an important share of the chain’s sales in recent years, due to low prices and prestigious branding.

The Israeli stores will also offer a variety of accessories including bags, belts and jewelry; as well as selected underwear items that do not require fitting, such as panties, baby-dolls and pajamas. The stores aim to cater to impulse-shoppers and as such will not have changing rooms.

The Victoria’s Secrets brand has over 1000 stores in the US, mostly in shopping malls, and over 100 independent stores that feature its beauty products.

For years Voctoria’s Secrets refused offers to globalize the brand. Even the Canadian store was opened under a different name. Many Israeli business corporations tried to convince the pro Israel CEO, Leslie Wexler, to import the brand to Israel including the Sakal family, the Gindi family and Rami Shavit.
Posted by juliette.bensimon at 5:47 PM