Respectfully submitted by the Makabit, notes on the events befalling the Bay Area Zionists on the evening of February 25, Oakland, California:

A brief primer on Gilad Atzmon for those of you who may have blissfully erased him from your memory banks since the last time he popped up. Atzmon is on record as saying:

“I’m not going to say whether it is right or not to burn down a synagogue. I can see that it is a rational act.”

“American Jews do try and control the world by proxy”

“There is no such thing as anti-Semitism”
“Why is it that the Jews who repeatedly demand  that the Christian world should apologize for its involvement in previous persecutions, have never thought that it is about time that they apologized for killing Jesus?"


“I wanted to be an ordinary human being, which is very unusual for a Jew.”

He is most recently the author of a book entitled The Wandering Who? A Study of Jewish Identity Politics, described by Walter Russell Mead as "a genuinely anti-Semitic book by a deeply twisted anti-Semite — who happens also to be Jewish." The book, among other things, speculates about the truth of the blood libel, and points out in Hitler's defense that American Jews were persecuting him by boycotting German goods. Atzmon also adds, of the Shoah: I think that 65 years after the liberation of Auschwitz, we must be entitled to start to ask the necessary questions. We should ask for some conclusive historical evidence and arguments rather than follow a religious narrative that is sustained by political pressure and laws.


I won't even get into what he says about Israel, a nation that had the misfortune to count Gilad Atzmon as a citizen until he renounced his connections to Israel, Judaism, and sanity. (He now lives in Britain, which deserves better.) So you get the idea: proudly self-loathing, comfortable with the tropes of Holocaust denial, and reviving the ugliest smears of classical anti-Semitism.


This charming fellow is much beloved by people who hate Israel, and are pleased by the vicious image that Atzmon creates of Jews and Israelis. Which is why he is repeatedly invited to star at various 'fundraisers' for various anti-Israel activities. Most recently, this led to his being invited to Oakland, CA, on the evening of Saturday, February 25, for an evening of music and anti-Semitism, to raise funds for the Global March to Jerusalem. For reasons that will follow shortly, I do not believe that they can have possibly raised enough money to cover the cost of flying Mr. Atzmon out from England. In fact, one of the most consistent things about Atzmon's fundraising endeavors is that they never seem to raise much in the way of funds. But that is a consideration for another day.

Of course, if we was gonna be there, we were gonna be there. The Zionist activists and proud Jews of the Bay Area revved up. We took old signs out of storage, and painted new ones. There was no way Atzmon was going to speak anywhere in the Bay Area without us standing by and telling the world the truth about his vile shtick. We were a little nervous, after the peaceful organizers of this event contacted anarchists at Occupy Oakland for 'security', soliciting the response "Who do you want us to beat up?" But we went anyway. We were determined to speak truth to...whatever it is Gilad Atzmon is.

Things got complicated after that, though, because rather than face being called out for being a purveyor of hate speech, racism, and vile lies, Gilad Atzmon went on the run.

We arrived at the designated location, only to find that the only people stirring around the building were young and fashionable--not exactly the typical Atzmon fans. Several of the girls were wearing wigs teased into big Afros. It was, as we later learned, the Seventh Annual Say it Loud 70's Fashion Show. 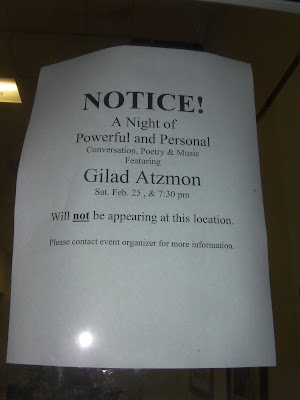 We admired the young people's retro ensembles. But where was Atzmon? We found this notice taped to the inside of a nearby door.

As you'll note, they didn't leave an address or phone number, which is customary when a piece of theater has a change of venue, but then again, the point of the change of venue may simply have been to shake off pursuit. While a forlorn pair of Atzmon fans called several numbers, trying to find out where the event had gotten to, the Zionists surveyed the scene, and shrugged. The field was ours, and we were on the point of declaring victory and going out to dinner. We even took a few photographs.

Fortunately or unfortunately, we then found out where Atzmon was hiding. (It was cold and bleak and dark, and I was actually looking forward to dinner.) However, one of the organizers showed up to discreetly hand out flyers with the new address, and armed with one of these, we leaped back in our assorted conveyances and headed out to find Atzmon's new hide-out.

Atzmon's new venue turned out to be the Islamic Cultural Center of Northern California, and I confess that when I saw the sign, I actually shrieked a little, and our driver was so discombobulated that she accidentally parked in the cultural center's parking lot. This later turned out to be something of a problem, but we were, to put it mildly, startled.

I do not know how Gilad Atzmon managed to find shelter from the storm at the Islamic Cultural Center of Northern California, seeing as he is neither a Muslim, nor particularly cultured, aside from his saxophone playing, which is apparently pretty decent. I can only assume that he was seriously mischaracterized to the poor soul in charge of scheduling, who therefore made the disturbing mistake of letting a man who thinks burning a synagogue is a 'rational act' into a building which serves as a mosque.

We all spilled out of our cars, and lined up along the fence in front of the ICC parking lot. We had signs, and a banner, and a flag, and we all made ourselves fairly comfortable. (It was cold, it was dark, and we were protesting a nasty bigot in front of a local Cultural Center, but other than that, we were comfortable.)

After that, things went fairly smoothly. An event organizer hovered outside, glaring at us, and denouncing our flyer as a pack of lies. A few young men, wearing sunglasses in the middle of the night, were produced from somewhere, and stood around, nominally protecting the entrance to the ICC. I believe they were intended to look menacing, but they seemed more intrigued by us than anything else.

Meanwhile, no actual ticket-holders seemed to be showing up. We gathered, from hurried conversations between the organizers, that things were being delayed, while everyone was apprised of the new location. That was OK. We waited. Meanwhile, people kept exiting the ICC, many of them with young children, apparently leaving some other event inside. I felt rather awkward as they walked past me. It seemed like mere politeness to scream a warning. "Your cultural center has Gilad Atzmon in it!" I mean, I would want to know. But I wasn't sure of the etiquette for this situation. I settled for smiling politely.

The organizer-in-chief threatened to call the police, so we tried to be helpful and called them ourselves. They showed up several minutes later, and chatted with our representative and that of the Atzmon fans, familiarizing themselves with the situation.

They also turned out to be useful because, as I may have mentioned, we had parked in the ICC's parking lot, and getting out was now starting to seem somewhat perilous. I'm trying to make this whole outing as lighthearted as possible, but the truth of the matter is that any fan of Gilad Atzmon's is pretty much automatically a pretty special kind of hater, and these people scare the heck out of me. Luckily, one of the police officers, apprised of the situation, agreed to escort our car and driver out of the parking lot.

After that, we stood around and held our signs and got very cold, while the Atzmon people engaged in their favorite pastime, filming Zionists. One of them attached to one of our activists and kept him talking for the entire hour and a half we were there, filming the whole thing. A young woman smoking hand-rolled cigarettes and wearing an "I Heart Gaza" t-shirt filmed the rest of us.

Oh, yes, the actual event? Well, fewer than twenty-five people attended in the end. A trickling handful arrived and were ushered into the parking lot as we stood there. There may have been more activists outside than suckers inside.

We were freezing outside, and in the dubious company of Gilad Atzmon's fans. We were still doing better than those inside, who were listening to Gilad Atzmon. Transcript of the hideous speech that transpired inside coming up in the next post.
Posted by Makabit at 8:42 AM

I've read Gilad at VT when ever his articles come up, and I know I'll be shocked by at east 3 things he says, but C'mon man, All you used your brain for is To Voice HATE about a person and others like him...isn't gilad Jewish. You sir are anti Semitic. Not once did you point out a single inconsistency, Falsehood or hyperbole in any part of this, What my 3 month old child calls, "WAAAAAAAAAAAH WAAAAAH MOMMYYYY MOMMYYYY" Please feel free to blindly worship a nation, and men like idols.

I always claim that the phenomenon of the "self-hating Jew" belongs in the realm of compassion, not contempt. It is as rational a product of virulent antisemitism as the death camps were. It is a mutilation of the soul, for which there is no prosthetic, cure or surgery.

Atzmon just joins a certain trend in the history of the Jews, the most recent example I encountered was Irène Némirovsky, a Jewish author who wrote successful novels which depicted ugly, monstrous Jews before she was deported to die in Auschwitz.

"And after her arrest her husband, Michel Epstein, pleaded with the German ambassador for her release, arguing that "it seems ... unjust and illogical to me that the Germans would imprison a woman who, though originally Jewish, has no sympathy, and all her books show this ... for Judaism."

It's beyond ironic. Another irony I found in the fact that Nemirovsky, as hellbent as she was on getting away from her roots, married a Jewish man. How come?

The whole thing reminds me of Louis Malle's film "Lacombe Lucien" in which an illiterate, anti-social French Nazi collaborator who likes to kill things, forces himself on a young beautiful, talented, Jewish woman who lives in semi-seclusion with her father. He takes her to a party where she is treated like a whore. At one point, she says (I'm paraphrasing from memory): I'm so tired of being Jewish... I want to stop being Jewish...

Can we sincerely condemn her?

Hannah Arednt understood the Nemirovskys and Atzmons of this world, as she observed in "Rahel Varnhagen": "In a society on the whole hostile to Jews, it is possible to assimilate only by assimilating to antisemitism also".