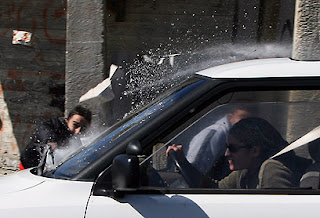 Zehava Weiss, a teacher was on her way home to to Karmei Tzur on Tuesday when she found herself the target of a rock salvo that smashed her windshield. An AFP photographer who was standing nearby captured the scene

Some context, from YNET

"This wasn't Weiss' first time in an incident of this kind.

"The Palestinians love to throw stones near that spot, and at two other sites near the village," she said. "I have lived in Karmei Tzur for eight years and I can tell you that they hurl stones almost every day.

"My heart was beating so fast after the incident, but we have to continue driving through there," she added. "What choice do we have?" "

Does this look like "non-violent resistance" to you?
Posted by Dusty at 6:37 PM