A new Blood Libel? The "storming" of the Temple Mount 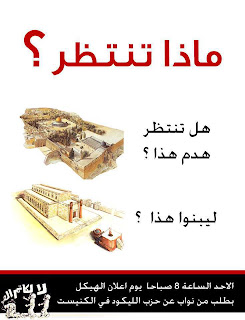 Anti-Israel groups have ratcheted up their rhetoric and are accusing him of "Storming the Temple Mount" . The level of invective and hyperbole on anti-Israel websites might be enough to spark a third Intifada. Perhaps that is even the goal.

From the blog "The Warped Mirror"


It’s not about the “occupation” – the call to “defend” the Al-Aqsa mosque against imaginary Jewish onslaughts has been used with often deadly consequences since the 1920s."

"The idea that the Al-Aqsa mosque is threatened by Jews is an invention that goes back to the days of Haj Amin al Husseini, the Mufti of Jerusalem, who later gained notoriety as a Nazi collaborator. In the 1920s, al Husseini renovated the “Haram al-Sharif” – as the Temple Mount is known in Arabic – and he began to accuse “the Zionists” of plotting to rebuild the Jewish Temple. His incitement contributed to repeated outbreaks of violence against Jews that culminated in the Hebron massacre of 1929.

Some 80 years later, al Husseini’s legacy is echoed in the incitement spread by the likes of Sheikh Raed Salah, the head of the Islamic Movement’s northern branch, and Sheikh Kamal Khatib, another leading figure of this group.

Both of these Islamic leaders have made statements and speeches that mix fervent Muslim piety, fanatic nationalism, antisemitism and racism. While Salah doesn’t give interviews to Jewish reporters, Khatib declared in a recent interview on Israeli radio that Jews have no historical connection to the Temple Mount and that Muslim sensibilities were offended by the presence of Jewish security guards “from Ethiopia” – whom he referred to with a racist slur against blacks. For good measure, some Islamic Movement followers shouted during a recent demonstration the triumphalist Muslim slogan often used in attacks against Jews: “Khaybar Khaybar ya Yahud, jish Muhammad saya’oud” – that is: “Khaybar, Khaybar, oh Jews, Mohammed’s army will return”. 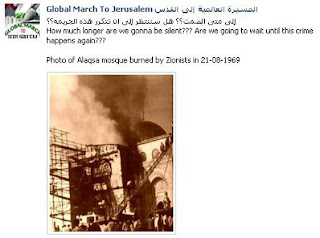 The extremists from the Global March to jerusalem are using this fabrication to promote their cause, with a photo of a fire at Al Aqsa from 1969, claiming it was started by "zionists".

It wasn't though. Denis Michael Rohan was an Australian citizen who gained worldwide infamy on 21 August 1969, when he attempted to set fire to the Al-Aqsa mosque, located atop the Temple Mount in Jerusalem. Rohan was arrested for the arson attack on 23 August 1969. He was tried, found to be insane, and hospitalized in a mental institution. On 14 May 1974, he was later deported from Israel "on humanitarian grounds, for further psychiatric treatment near his family". He was subsequently transferred to the Callan Park Hospital in Australia. In 1995, he was reported to have died under psychiatric care

The near hysterical rhetoric of the anti-Zionists, coupled with the irresponsible behavior of Moshe Feiglin are fanning the flames of a very difficult situation.

Pray for the peace of Jerusalem.
Posted by Dusty at 3:47 PM