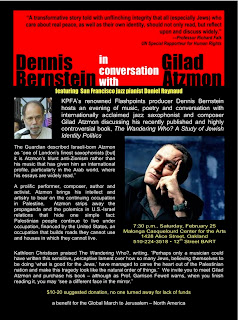 Our Friends at CIF Watch have done an excellent job of documenting the terror-links of the principals behind the Global March to Jerusalem, scheduled for March 30.

Organizers include:
Maan Bashour: the General Co-coordinator for the Muslim Brotherhood centre in Beirut, head of the preparatory committee for the ‘right of return forum’ and General Coordinator of the National Initiative Committee to Break the Blockade of Gaza (NICBBG).

Dr Ribhi Halloum : joined the PLO in 1966 and was its regional underground organizer in the UAE until 1971. He was a member of the Fatah Revolutionary Council and the PNC until resigning in 1993 over opposition to the Oslo Accords. He heads the Jordanian preparatory committee for the march and according to an interview he gave in December 2011 prior to the recent GMJ conference in that country, “[t]he protest aims to move the right of return possessed by Palestinian refugees from theory to practice”

Paul Larudee: one of the founders of the ‘Free Gaza’ and ‘Free Palestine’ movements as well as the International Solidarity Movement (ISM) with which he was active during the second Intifada. He took part in the 2008 and 2010 flotillas, was deported from Israel in 2006 for trying to enter the country under a false identity and allegedly volunteered as a ‘human shield’ for Hizballah during the second Lebanon war.

George Galloway : well-known figure on the anti-Israel activism scene, his activities ranging from ‘Viva Palestina’ in its various incarnations, to working with the Palestine Solidarity Campaign and Stop the War Coalition and being employed by the Iranian regime’s Press TV. Galloway believes that “Hizbollah is not and has never been a terrorist organization” and that Israel is responsible for the assassination of Rafik Hariri. Last seen sucking up to teh bitcher of Syria.

Khaled Soufiyani:former chair of the Arab National Congress and co-coordinator of the Moroccan organization the ‘National Action Group (sometimes ‘Task Force’) for Solidarity with Palestine and Iraq’. In 2010 he called on a Moroccan Jewish advisor to the king to leave the country as a result of the former’s suggestion that the Holocaust should be part of the curriculum in Moroccan universities. He is strongly opposed to any normalization of relations between Israel and Morocco, and in particular to the establishment of the Amazigh-Israel Friendship Association, and has made several attempts to use ‘lawfare’ against Israelis visiting the country.

Abdul Ghaffar Aziz: member of – and spokesman for – Jamaat e Islami – the Pakistani Islamist movement which has ties to the Muslim Brotherhood and was founded by Abul Ala Maududi.

You get it, right? These aren't peace activists. These are people inextricably linked to Hamas and the Muslim brotherhood, and to the destruction of the state of Israel.

So, when terror supporters want to get together and have a party, there's only one person they call. Who else could it be but Gilad Atzmon?

The racist and anti-Semitic agenda of Gilad Atzmon is known world-wide. He is scheduled to appear on Feb. 25 at the Malonga Casquelourd Center for the Arts in Oakland as a fundraiser for the Global March to Jerusalem. He's graced the Bay Area before. On his first trip, sweet gentle Unitarians were reported to flee his talk in tears, appalled by his overt anti-Semitism. On his second trip, he played to a nearly empty house. Both times, community members joined together in protest.


From our friends at Bluetruth
Classic anti-Semitism from the mouth and pen of Gilad Atzmon:

"Throughout the centuries, Jewish bankers bought for themselves some real reputations of backers and financers of wars and even one communist revolution. Though rich Jews had been happily financing wars using their assets, Alan Greenspan, the Chairman of the Federal Reserve of the United States, found a far more sophisticated way to finance the wars perpetrated by his ideological brothers Libby and Wolfowitz."

Source: http://palestinethinktank dot com/2008/09/30/gilad-atzmon-credit-crunch-or-rather-zio-punch/ (note: to avoid linking to some of these sites, I have replaced "."with "dot")

Another Jews-run-the-government line, this one from his own website www dot gilad.co.uk/html%20files/onanti.html :

" The 'Elders of Zion' syndrome: Zionists complain that Jews continue to be associated with a conspiracy to rule the world via political lobbies, media and money. Is the suggestion of conspiracy really an empty accusation?
The following list is presented with pride in several Jewish American websites.
Jews in Bush's Administration (a list of some 30 names follows…)
Let me assure you, in Clinton's administration the situation was even worse. Even though the Jews only make up 1.9 per cent of the country's population, an astounding 56 per cent of Clinton's appointees were Jews. A coincidence? I don't think so."

The same article trots out the old "Christ-killer" charge:

"I would suggest that perhaps we should face it once and for all: the Jews were responsible for the killing of Jesus who, by the way, was himself a Palestinian Jew. …..Why is it that the Jews who repeatedly demand that the Christian world should apologise for its involvement in previous persecutions, have never thought that it is about time that they apologised for killing Jesus?"

The careful reader will note that the words "Israel" or "Zionism" do not appear in the above quotes. Yes, they appear elsewhere in those screeds. But the record is clear. He is spreading anti-Semitic hate.

There's so much more. There's a treasure trove of Atzmonia collected over at Harry's Place --just type in "Atzmon" in the search box

In 2005, the Guardian reported one of his statements that is clearly incitement.

"Gilad Atzmon, a pro-Palestine advocate, gave a talk to students this month, arguing: 'I'm not going to say whether it is right or not to burn down a synagogue, I can see that it is a rational act.'"

There's nothing ambiguous, nothing that can be misinterpreted about THAT.

And again, a protest is planned. From Craig's list
Join a protest against Racist and anti-Semitic musician Gilad Atzmon at Malonga Casquelourd Center for the Arts.
1428 Alice St Oakland Feb 25th at 6:30pm

Our community says No to hate Speech. Join us in Oakland on February 25
Posted by Dusty at 5:53 PM

thanks for the heads up on this. i'd be curious to see how many familiar faces we'll see from that bogus "no war with iran" rally a couple weekends ago.

There's also a jazz session with Atzmon and Daniel Raynaud at Studio Pinkhouse on Wednesday, May 11.

This is the link:
http://plancast.com/p/55l4/gilad-atzmon-saxclarinet-daniel-raynaud-piano

People should drop comments and let Raynaud know what they think of him.

As I’ve noted previously, merely characterizing Gilad Atzmon as antisemitic doesn’t do him justice. Atzmon advances hateful, demonizing rhetoric about Jews which is on par with the most vile Judeophobic charges ever leveled, and which is often as crude and malevolent as what would be heard at a meeting of neo-Nazis or Islamist extremists.

In brief, he repeatedly refers to Judaism as “supremacist“‘ faith, a term popularized by David Duke. And, Duke, the former grand wizard of the KKK, has strongly praised Atzmon’s writings.