Bay Area Women in Black are up to their old lies. 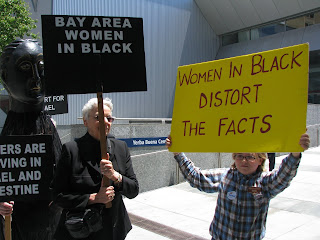 Obsessed by the eternal cult of victimization that the Palestinians embrace, Bay Area women in Black can't possible conceive that the Palestinians might actually be complicit in perpetuating the conflict in the Middle East. They never seem to notice the almost daily incitement of hate, the indoctrination of children on Palestinian government run television, the words of the very leaders of the Palestinians calling for the genocide of the Jewish people.

Bay Area women in Black routinely rewrite history in their flyers, protest Jewish cultural events and stand shoulder to shoulder with the most egregious anti-Semites. They consider themselves a peace group, but their vision of peace is a world without Israel.

The Bay Area Women in Black have recently endorsed the Global March to Jerusalem. From their email:

The Global march to Jerusalem, an assault on Israel's sovereignty and her borders is orchestrated by leaders of the Muslim Brotherhood working side by side with Bay area "activists" including Paul Larudee and the late Scott Kennedy, of less than blessed memory. The March made its debut in the blogs sphere on Aug 26. 2011. We first wrote about the Global March to Jerusalem in November. At that point, it had clearly been months in the planning.

In December Mayor of Jerusalem Nir Barakat simply asked to cede municipal control over some neighborhoods in the eastern part of the city. In spite of the protest of "genocide" and "ethnic cleansing", its simply not the case. The Barakat plan is unlikely to progress because of opposition on both the left and the right.

"Coalition chairman Zeev Elkin (Likud) said Barkat's plan could jeopardize Jerusalem's unity. "The areas he wants to cede are under the State of Israel's sovereignty and are protected under Basic Law: Jerusalem, Capital of Israel and the referendum law, which was passed by the current Knesset," he said. 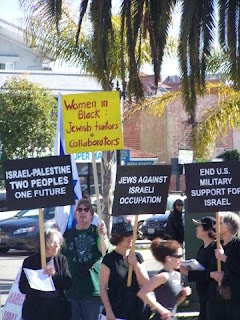 Bay Area Women in Black once again have distorted truth to perpetuate the myth of Palestinian victimhood. Obsessed with their hatred of all things Israeli, and all things Jewish, they have blinded themselves to truth and justice.
Posted by Dusty at 4:42 PM

Why aren't these fakes burka'd up? Surely that is what they imply re women in black? Or are they just invoking evil and Nazi SS uniforms?

i bet some of them will be at the pro-iran march in SF this saturday.

Women in black and Code pink are both promoting Saturday's event.