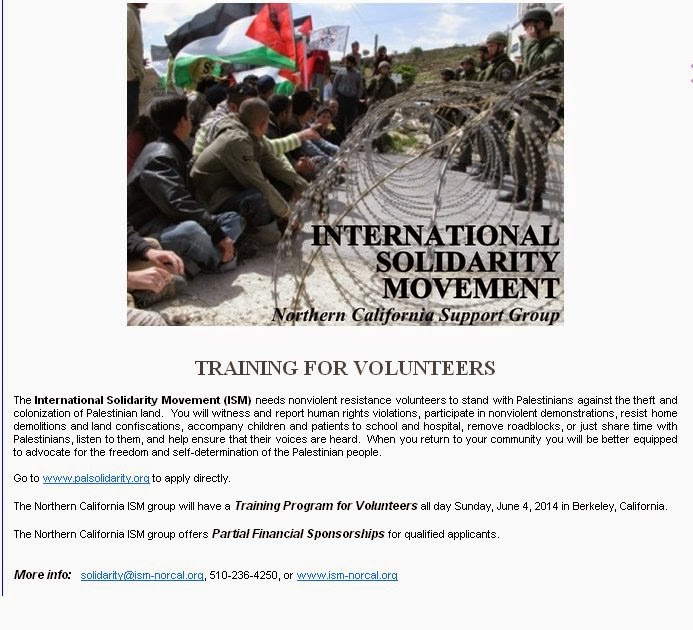 If you've got a hankering to be used , abused and even sacrificed by terror supporters, this is your chance. Training will be held (where else?) in Berkeley.

The head of the Northern California International Solidarity movement Paul Larudee has been under fire recently by his anti-Israel peers, who have accused him of everything from financial impropriety, to political showboating.  He has been kept at arms length by those alarmed by his allegiance to Iran, his support of violence as well as his ties to notorious anti-Semite Gilad Atzmon. Its not clear whether the disagreement is truly philosophical in nature,  or if its simply politically expedient to distance oneself from those with clear ties to terror.

Paul has been desperately trying to recapture  a place for himself in the anti-Israel movement  Its hard to feel sorry for Larudee,  who helped organize the failed Flotilla, and the failed Global March to Jerusalem

alright let's hear it for the ISM suicide squad :)

For more on ISM recruitment read article at this link:

Except that there's a near zero chance any of them will ever be harmed by the IDF unless they actually become shahids. Which maybe isn't such a bad idea - give the whole suicide bomber program a whiter more American complexion. What's the worse that happens? A few student loans go unpaid?

ISM stands for
I support Murderers.

"Spparow" is the nom de guerre of attorney D. Leland Castleberry. I believe the D stands for "Donald" . Sparrow= "The other Donald"