A rally in support of bullying and intimidation in the guise of "free speech" is being organized and organized at Northeastern university by the likes of Jewish Voice for Peace and United for Peace and Justice. 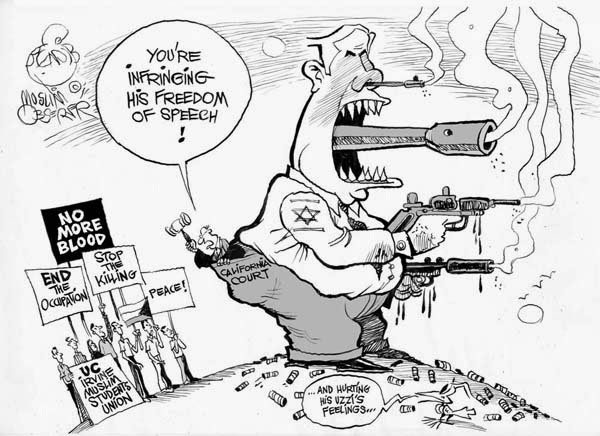 Only a little anti-Semitic, right?


Where: front of the Krentzman Quadrangle • , by the Northeastern University stop on the MBTA Green line • Boston
The administration of Northeastern University has suspended Students for Justice in Palestine (SJP) after months of discriminatory restrictions. Two students of color face disciplinary action for leafletting student dormitories, while no white SJP members have been singled out for sanctions.

These two students will attend disciplinary hearings on the morning of Tuesday, March 18th and SJP has called for the solidarity of the greater Boston community. Whether you support justice for Palestine or simply free speech on campus, come out at 10 AM to defend these brave students who have done nothing more thNtian speak out for human rights.

We will meet on the public sidewalk in front of the Krentzman Quadrangle, by the Northeastern University stop on the MBTA Green line. 10AM.

We will march entirely on public sidewalks, and legal observers will be present.

Jewish voice for Peace urged its followers to call Northeastern's President and  presented a sample script to read.  Incidentally, Jewish voice for Peace, the "Proud to be ashamed to be Jewish" wing of the Palestinian solidarity movement was completely silent when Mohammad Hammad repeatedly threatened Jewish and Israeli students at SFSU last year.

Banning SJP at Northeastern is the latest assault in an ongoing pattern of silencing student activists nationwide. Across the country, campus activists face repression, from legislation targeting the American Studies Association’s academic boycott vote to spurious discrimination complaints at the University of California.

Call or email President Aoun today to ask him not to suspend Northeastern SJP: His email is presidentaoun@neu.edu and his phone number is (617) 373-2101. Please call before 5 PM E.T. on Friday.


Phone calls send a stronger message than emails. If you're willing to make one, please do the following:
Sample Script

Hello, this is [your name] from Jewish Voice for Peace. I am calling to express my concern that the Center for Student Involvement has issued a suspension of Northeastern University Students for Justice in Palestine.
This measure constitutes a violation of SJP’s freedom of speech rights, and is intended to silence their message on campus.The suspension of SJP is politically motivated because the University administration disapproves of SJP’s message and believes it is potentially divisive.
Northeastern University is bowing to the pressures of outside interest groups and large donors, rather than protecting its own student’s fundamental rights.

I urge you to reinstate SJP as an organization and take measures to ensure that this type of repression does not occur again. Thank you.

The Administration of Northeastern University has documented a series of specific violations of university policies that have lead to the temporary suspension of SJP.

The temporary suspension of SJP was handed down only after a careful and thorough review of the facts. Despite repeated efforts by university officials to work with the leadership of SJP, the organization has repeatedly shown a disregard for university policies over an extended period of time. Specific violations include—but are not limited to—vandalism of university property, distribution of flyers in residence halls without prior approval, and disrupting the events of other student groups.

Contrary to the assertions in the petition, SJP leaders have not been banned permanently from participation, and the organization has had many opportunities to discuss its conduct with university officials. Further, reports that expulsion procedures have been initiated against students affiliated with SJP are false.

The issue here is not one of free speech or the exchange of disparate ideas. Instead, it is about holding every member of our community to the same standards, and addressing SJP’S non-compliance with longstanding policies to which all student organizations at Northeastern are required to adhere.”

I assume people can call or email Pres. Aoun to support the suspension of SJP. What's good for the goose is ggod for the gander.