Week of Rage Against Mekorot

World Water Day was yesterday
The anti-Israel crowd's reaction was predictable.
They didn't focus on the new desalinization plant in Gaza, which will provide 6,000 cu.meters of drinking water per day to  75,000 Palestinians in Khan Yunis and Rafah in southern Gaza.  It has the chance to make a huge difference in the lives of ordinary Palestinians. They don't care. Not a mention. Could it be because these so called "peace activists" are less concerned with helping the Palestinian people, that they are with destroying Israel?

Instead, the focus of their attention is yet another coordinated campaign against Israel.

From the BDS cru:

Campaigners from around the world are taking part in a week of action against Israeli national water company Mekorot, the main agent of Israeli water apartheid against Palestinians. The week launches on 22 March, World Water Day, and lasts until 30 March, when Palestinians mark Land Day in protest of Israeli systematic land and resource theft. The mobilizations come in response to a call from Palestinian organizations PENGON/Friends of the Earth Palestine, the Palestinian BDS National Committee and the Land Defense Coalition.

Via the BDS'ers:  More samples of what is becoming widely known as the "Water Libel"

... lucrative contracts often connected to water privatization drives. Mekorot claims to sell its "expertise"
Its all about the money

...persistent denial of water to Palestinians,
The poor thirsty Palestinians (a corollary of the starving Palestinian meme thats become a running joke on the web)

... collusion with the Israeli military to destroy Palestinian water infrastructure,
Its all Israel's fault

...while providing unlimited amounts to Israelis.
How dare the unworthy Jews get more.


Can there be a  mass mailing from the BDS'ers without a post hoc fallacy, or a down right hoax? They claim,  "In Argentina campaigners were successful in suspending a major multi-million dollar government contract with Mekorot to build a wastewater treatment plant.", yet that was in 2012. Hardly news, and there is no evidence that the decision had anything to do with the BDS campaign.

In the US, there is only one event planned, not surprisingly, in the land of Rachel Corrie. Yawn. 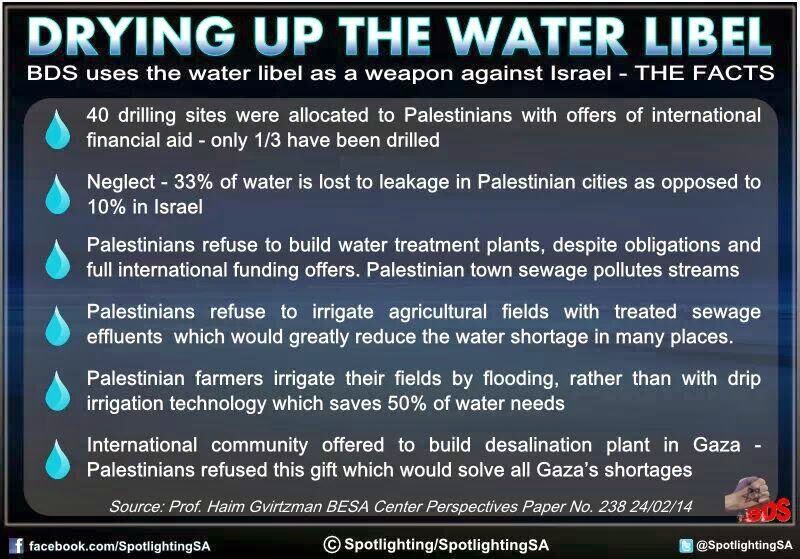 Your must read for "Rage Against Mekorot week" is by Dr. Haim Gvirtzman  The Truth Behind Palestinian Water Libels

EXECUTIVE SUMMARY: Water shortages in the Palestinian Authority are the result of Palestinian policies that deliberately waste water and destroy the regional water ecology. The Palestinians refuse to develop their own significant underground water resources, build a seawater desalination plant, fix massive leakage from their municipal water pipes, build sewage treatment plants, irrigate land with treated sewage effluents or modern water-saving devices, or bill their own citizens for consumer water usage, leading to enormous waste. At the same time, they drill illegally into Israel’s water resources, and send their sewage flowing into the valleys and streams of central Israel. In short, the Palestinian Authority is using water as a weapon against the State of Israel. It is not interested in practical solutions to solve the Palestinian people’s water shortages, but rather perpetuation of the shortages and the besmirching of Israel.