The Lesson? When your plans call for travel through areas dominated by despotic regimes, buy travelers insurance.  You'd think Code Pink would have figured that out by now. They've been detained by Egypt before

Anti-Israel activists Mairead Maguire and Medea Benjamin were deported earlier this week. Additionally, eleven women were sent back to Istanbul,  22 to Paris and six to Frankfurt.  65 activists have been deported over the past 24 hours.

There are reports of a sit-in, or perhaps a stand-in by the unclear on the concept delegates, being staged at the Cairo Airport 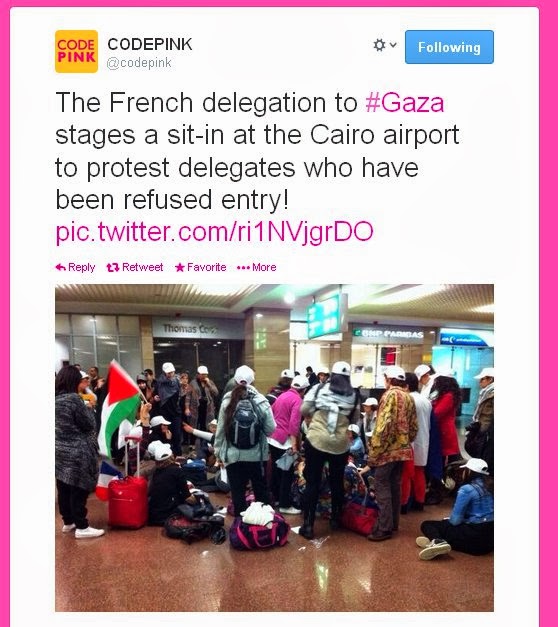 “Women’s rights in Gaza are regressing. Many decisions are being passed in secret and only become public by chance, such as the decision to destroy curriculum books that are thought to be morally corrupting, in addition to the imposition of the hijab in schools and the prohibition of female participation in folklore dancing. When Hamas officials are asked about these matters, they always end up finding shallow justifications,” said feminist activist Dunia al-Amal Ismail.

Ismail contends that whenever women call for change and an improvement in their social situation, they are asked to put their demands on hold under the pretext that it is not the right time; the people are fighting the Israeli occupation. Ismail, however, notes dangerous changes being made by the government pertaining to the endorsement of the penal code without informing the feminist movement. Causes like gender equality are seen as a western product and feminist movements are thought to contradict Islamic feminism. “Accusations are heaped upon the feminist movement, even though the struggle it led — on the level of amending laws and imposing quotas for women — has ushered in the participation of Hamas’ women in the legislative council,” she added...

No, they weren't. This has never been about addressing the real issues that women in Gaza face. International Women's Day - any day, and every day is just another reason for groups like Code pink to bash Israel.
Posted by Dusty at 12:54 PM

Clearly. You don't carry Palestinian flags if you are going to protest conditions within Gaza.

I have cross-posted this on fousesquawk.

i'll tell ya what those filthy leftist Jew haters did get was some publicity out of it. The S.F. Chronicle had an article about this with a picture of that disgusting rat faced medusa Benjamin.