From the Olympic charter: "The practice of sport is a human right. Every individual must have the possibility of practicing sport, without discrimination of any kind and in the Olympic spirit, which requires mutual understanding with a spirit of friendship, solidarity and fair play."

Anti-Israel activist David Zirin is leading the vanguard to deprive Israelis of their human rights by asking international bodies to discriminate against Israelis based on their national origin. He is hardly an impartial party.

A recent article by Zirin published in the Nation comes darned close to blood libel, continuing the egregious and anti-Semitic meme of Israel shooting Palestinian children for sport. Never mind in this case that the two "children" in question were older teen aged boys who may have been planting a bomb at the time.

This article describing the arrests is in Haaretz and was written Amira Haas, another "journalist" not exactly known for her objectivity. Yet it comes closer to the objective truth than Zirin's propaganda leaden missive.

Two Palestinians have been hospitalized in Jerusalem since Friday after they were shot and arrested by Border Police forces amid claims they were going to throw a bomb. The two Palestinians are under guard in Hadassah University Hospital, Ein Karem, have been operated on for their gunshot wounds, and will remain there until their treatment is finished. They deny the claims made against them, and contend that the Border Patrol forces shot them, sent attack dogs to chase them, beat them with their rifle butts, and punched and kicked them.

Attorney Tarek Barghout, from Palestinian Authority prisoners’ ministry, visited the two men in the hospital twice. One of them, Barghout says, was hit by many bullets and had a bite wound on his arm. The lawyer told Haaretz that the two suspects told him they bought cigarettes at a nearby store and were shot as soon as they lit a match. Immediately after, they were attacked by dogs. They claim the Border Police troops beat them, then dragged them to the base – 300 meters from where they were attacked. They claim they were beaten inside the base as well.

Adam Jamous, 17, and Jawahar Halbiyeh, 19, are residents of Abu Dis, a town east of Jerusalem. Last Thursday evening they were en route to visit a friend in a neighborhood close to a Border Police base. An Abu Dis resident told Haaretz that before midnight, residents heard a lot of gunfire and saw dogs attacking the two men when they looked out the window.

Dave Zinin does not get the men’s names correct. He asserts Jawhar and Adam were "on their way home from a training session in the Faisal al-Husseini Stadium" because having them buying cigarettes doesn’t add to the illusion of their wholesome victimhood. And he just can’t bear to have them treated in the world renowned Hadassah Hospital and instead puts them  in a Jordanian hospital. Dave- Would a Jordanian hospital have Hebrew writing on the sheets ? Would a Jordanian hospital use sheets adorned with Jewish stars? 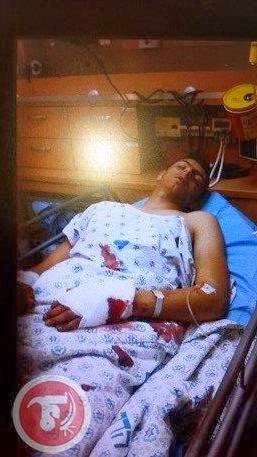 In response to inquiries, a Border Police spokesman said, "During operational activity, a group of individuals was seen just seconds before throwing bombs at security forces. When they saw the Border Policemen, the group attempted to run away and tried again to throw bombs at the policemen. The policemen initiated the protocol for opening fire in order to neutralize the threat. The suspects were apprehended, and a bomb was found on them, which has been deactivated."

A Hadassah spokesman said the two "were admitted on Friday morning and are being held in the orthopedics unit. Their condition is stable. They were operated on, and are receiving all necessary treatment."

Dave Zirin loses all credibility as a journalist with this current piece. Will there be a retraction? I'm not holding my breath.

"As long as Israel subjects Palestinian athletes to detention and violence, their seat at the table of international sports will be never be short of precarious."

Well, not as precarious as it was in the 1972 Munich Olympics. I guess the writer is too young to remember that.

Someone needs to translate the story of "The Boy Who Cried Wolf" into arabic, then there's a slim chance that they might understand why everyone who isn't an anti-semite doesn't believe them.

Israel is simply an illegal state and should not exist.
I only hope that the return of the land to the real owners happened in a pacific way and without violence.