Is Code Pink's Medea Benjamin in jail in Egypt?

I'd have a hard time believing anything spoken, emailed or tweeted from the likes of Code Pink, but even a broken clock is right twice a day. With that in mind, I present "Code Pink goes to jail"

A series of tweets from anti-Israel activist Medea Benjamin(nee Susan Benjamin- yes, she re-named herself after a character in Greek mythology best known for slaughtering her own children)  implies that she is behind bars in Egypt.

The activist community already had a big laugh at Code pink, who recently used an Israeli platform, Wix to design a website promoting their trip to Gaza. BDS fail, girls.

Fresh from her aborted attempt to disrupt the AIPAC 2014 conference,  Medea apparently flew to Egypt. It was supposed to be a brief a pit stop before journeying on to Gaza for "International Woman's Day".

She's since tweeted  "I'm supposed to go w women's delegation to Gaza via Egypt but Egyptians put me in jail at airport".  Ooops.

Apparently the multimillionaire co-founder of global Exchange does not find the accommodations to her liking. 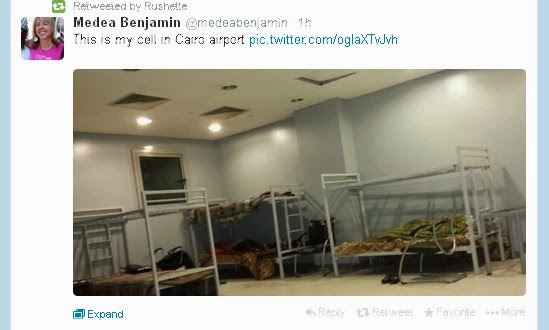 And the room service is terrible 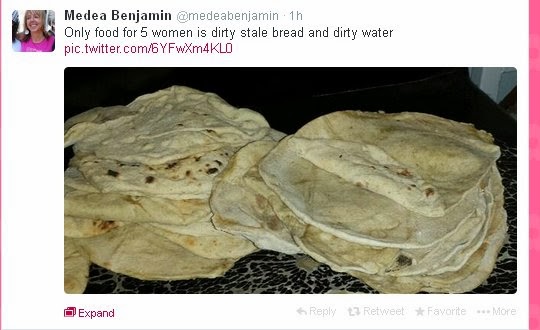 And because its Code Pink,  they strategize on line, on twitter, so the world can see.

After all, no one in Egypt has ever heard of Twitter.

Alli McCracken, who is so dumb its painful then announces to the world. There are more coming.  Oops.

Its hard for me to muster up any sympathy. After all, Gaza needs Code Pink like a lamb needs a wooly blanket.  Gaza is doing quite well without them.

Medea Benjamin has been deported to Turkey. A press release issued by Code Pink states she was treated "brutally" by Egyptian authorities.

looks like medusa benjamin is right where she deserves i so hope this is true.