If you ever needed any proof that BDS is a violently divisive, intimidating and disrespectful thing to thrust on a campus, you need look no further than on twitter and in the live feed of the divestment hearings at Loyola and at the University of Michigan.

There were insults: (Zizi is short for zio-nazi)

There was classic antisemitism

There was race-baiting and general misogyny 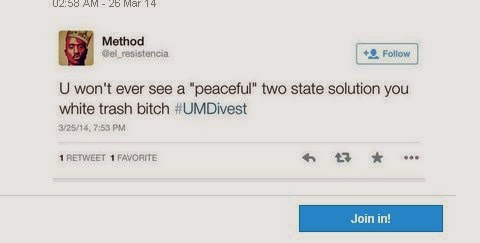 And there was no attempt to achieve consensus or mutual understanding

In the week prior to the hearing at U Michigan, pro-Israel students on campus were taunted with racial epithets, threatened and harassed.  Fearing for their safety, the student council chose to vote by secret ballot, and overwhelmingly defeated the resolution by a margin of 25-9.

The Loyola United Student Government Association voted March 18 to call on the university to divest from eight companies The vote on a measure proposed by the Loyola chapter of Students for Justice in Palestine passed 26-0 with two abstentions. SJP had 8 representatives on the council, and pro-Israel students were not given the opportunity to formulate a response.

Brett Cohen, a Loyola University alumnus and National Campus Program Director with StandWithUs, told JNS.org that the divestment resolution was introduced suddenly “using undemocratic tactics and no debate or opposition.”

“Students for Justice in Palestine introduced the bill without warning at the meeting, precisely to prevent debate. The BDS movement often relies on these unseemly political maneuvers to force through their agenda, which shows that they are afraid to debate this issue on its merits,” he said.

Cohen added, “The student government was hoodwinked by a movement which is openly against coexistence and a two state solution, and seeks the destruction of Israel.”

The resolution was reintroduced, and  last night, after hours of debate, narrowly passed by a vote of 12-10 with nine abstentions

“This legislation was framed in a manner that infers socially responsible divestment in a vacuum,”  “If we want to enact change, we must understand that our university will respond to a broad coalition of student concern, not an isolated one.”

Its been a good week for the forces of truth, justice and democracy.


Carolyn Glick's column puts it all in perspective. These campus bullies are brown shirts, and we must freely label them as such. That is a term everybody can relate to.

Here is one thing we can do. Get online with the campus newspapers where these things are happening. Find the news or opinion write ups on them. Add your comments to the reader thread. Emphasize the brown shirt tactics. Keep in mind, however, that we are appealing to the non-committed college student who is reading it. Save the insults and inflammatory rhetoric. These students are looking for reasoned discourse and will react positively if we appeal to human rights and rejection of anti-semitism and brown shirt tactics.