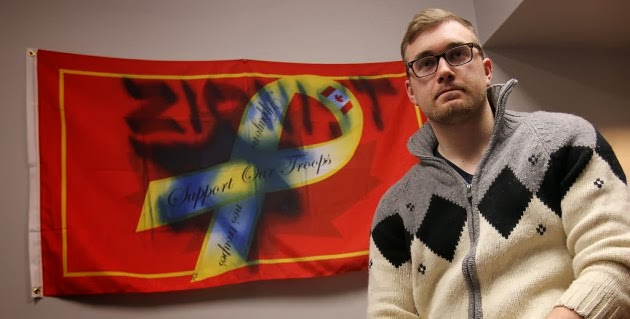 A student executive’s office was broken into and vandalized on the eve of a controversial referendum at the University of Windsor.

Today marks the first of three voting days of an undergraduate student referendum that seeks official endorsement of the growing Israeli Boycott, Divestment and Sanction movement.

Jake DeJong, vice-president academic affairs, arrived at the university at 9 a.m. this morning to discover vandals entered his locked office the evening prior, ransacking it and defaced a Support our Troops flag with the Star of David and the word “ZIONIST” above it in blue spray paint.

Campus Community Police, Windsor Police Service and the Ontario Provincial Police were on scene at the CAW Student Centre today dusting for fingerprints and photographing the crime scene.

Windsor Police have classified the case as a break-and-enter and hate crime.

“An office was broken into sometime overnight and the suspect(s) spray painted a message inside the office that was deemed to be racist in nature,” said Sergeant Matthew D’Asti, the public information officer for Windsor Police via a public news update Thursday afternoon. “Windsor Police are working with The University of Windsor Campus Police on this investigation in an attempt to identify the person(s) responsible.”

From the Windsor Star

The act has received condemnation from Windsor police and the Windsor Jewish Community Centre.

Windsor police said they are working with campus police to find who is responsible for the break and enter and “hate crime.”
Posted by Dusty at 12:08 AM

This is offensive to all Jews, everywhere, and, in fact, all thinking and feeling people of conscience. Sorry you had to experience this, but for those who thought, "it could never happen here", it's a horrible wake-up call. Shabbat shalom, and may the culprits be soon caught and REALLY educated: that anti-Semitism is ugly, baseless, and is completely contrary to the spirit of learning supposedly inculcated in a university. Let this person take a compulsory crash course in Jewish history and the roots and causes of anti-Semitism, and have him/her spread this new-found knowledge among the haters. Be well & G-d bless.

The whole incident smacks of a Harper type agent provacateur designed to smear the Palestinians. With cameras everywhere it shouldn't take long to arrest the perp. (My son was tossed from a Lancer b-ball game a few yrs ago for sipping beer from a disguised cuo. It's a campus with eyes) The only people quoted in the story are a local Jew and the VP of academic affairs who admits he was a reservist. Both play the safety card n attempt to block the referendum from reoccurring next year. With 3 different constabularies working on the case and nobody being arrested yet it appears this is an inside job .

So, Iris, your logic appears to be "There is no evidence, so lets blame the Jews"?

Not at all, Dusty. It is more an anti-Palestinian action which could have been done by any number of people. Don't know where you're from but in Canada the Conservative gov't has taken strong action against any group supporting the Palestinians. UK MP Galloway was banned from entering the country because of pro-Palestinian remarks and the Harper gov't voted against the Palestinians having observer status at the UN. The gov't also participated in a embarrassing agent provocateur incident in Quebec a few years ago in an attempt to smear the protesters. So the incident was more the work of the Conservative gov't's continued anti-Palestinian campaign. By no means did i suggest it was Jew who did this.this. Candian Jews are very liberal with the socialist NDP party being led by the highly respected Stephen lewis for years.

I still don't see your logic, Iris. You imply that burglarizing and vandalizing the personal space of an anti-BDS activist is an "anti-palestinian" action Your logic escapes me

It's meant to frame the Palestinians. Locally, the comments from the city newspaper are anti-violence , anti-Palestinian which isn't a surprise. Logic is far removed from such an emotional issue. Certainly you've heard of the agent provocateur. The Reichstag fire, the gulf of Tonkin, the Polish attack on a German radio, station in 1939, etc. were all used to justify some form of action. This is a staged attacked designed to muzzle debate on the Israeli-Palestinian issue. And it is not the personal space of the VP of Academic Affairs. it is a public building Had it occurred at his home it would be classified as his personal space. But if you read the story in the press it's amazing how much ink he is given to promote the military and complain about safety. Israel many great qualities-no capital punishment, no constitution which speaks to how all can get along. My point is about fairness not about disliking Jews. And i am aware of our current prime Minister's dirty trick and is intolerance of any criticism. As vindictive a guy who's ever led Canada.

Whoa, whoa, whoa, Dusty. My point of view is from a forensic angle with a considerable knowledge of how the present party in power operates here in Canada. I live in Windsor. You're starting to put words in my mouth and jumping to some conclusions about anti-semitism. I'm examining this particular situation and raising questions about the perp. You're construing this as i'm anti Israel. I'm not clouded by emotional prejudices. Maybe it's due to the nature of canadian Jewry. Richler, the Reichmanns Seth Rogin, Geddy Lee.

As a general rule, if you hear hoof beats, think horses. Not zebras.

We will both follow this story. We'll see where it concludes.

As for Jewish people denouncing Israel, that phenomenon is similar to what happened among Jewish people in Europe during the Middle Ages. Have you ever heard of Theobald of Cambridge?

"The concept of the 'evil Jew' has made a well-disguised comeback: Criticizing Israel and Zionists, is now deemed a legitimate option to cursing Jews and Judaism. Not only is it open, socially acceptable and legal, but it can actually bring prosperity and popularity. This new form of anti-Semitism 2.0 is well-covered-up, harder to trace and poses a much deeper danger to the modern way of life of the civilized world than the earlier crude form of it, as it slowly and gradually works on delegitimizing Jews to the point where it eventually becomes acceptable to target Jews, first verbally, then physically -- all done in a cosmopolitan style where the anti-Semites are well-groomed speakers and headline writers in jackets and ties; and not just Arab, but American and European, from 'sanitized' news coverage of the most bloodthirsty radicals, to charges against Israel in which facts are distorted, selectively omitted or simply untrue, as in former President Jimmy Carter's book on Israel.

"Why would a Palestinian* be writing this? The answer is simple:..."

THE NAZIS AND THE PALESTINIAN MOVEMENT
http://vimeo.com/69991225

About the phenomenon of the Stockholm syndrome that very many Jewish people (I think most Jewish people), including the leaders of the government of Israel, are experiencing to various degrees:

The Psychology of Populations under Chronic Siege, by Kenneth Levin
http://www.jcpa.org/phas/phas-046-levin.htm

The Paradox of the Jewish Mind, by David Solway
http://pjmedia.com/blog/the-paradox-of-the-jewish-mind/?singlepage=true