"I'm going right from the studio to Home Hardware where ever it is to get one of these deals here. I didn't know Oxfam was involved in crazy politics like this so I have to make a confession I 've given money to Oxfam in the past because I thought they were there to help poor people not marginalize Israelis and make Palestinians unemployed. I'm dropping Oxfam as a charity and I'm picking up Sodastream as a new customer.  Thanks very much to all the nutters at Oxfam  for marginalizing the Palestinian people who are getting good paying jobs 4 times more working at Sodastream in the West bank than they would at other Palestinian run businesses there."

And in more Sodastream News:

The Sodastream commercial featuring Scarlett Johansson has officially gone viral with over 8 million views since Jan 27.

And from the Christian Science monitor, more proof that "Palestinian Civil Society" rejects the BDS agenda, as Palestinian Sodastream employees express their concerns with the boycott

...those most familiar with the factory – Palestinians who work there – largely side with Ms. Johansson.

“Before boycotting, they should think of the workers who are going to suffer,” says a young man shivering in the pre-dawn darkness in Azzariah, a West Bank town cut off from work opportunities in Jerusalem by the concrete Israeli separation wall. Previously, he earned 20 shekels ($6) a day plucking and cleaning chickens; now he makes nearly 10 times that at SodaStream, which also provides transportation, breakfast, and lunch.

As a few dozen men in hoodies and work coats trickle out of the alleys to the makeshift bus stop where they wait for their ride to the factory, another adds, “If SodaStream closes, we would be sitting in the streets doing nothing....”

Speaking anonymously on a largely deserted street, with no Israeli SodaStream employees present, all but one of those interviewed said they opposed the boycott, given the lack of alternative job opportunities in the West Bank. That underscores Israeli claims that a boycott would be counterproductive, undermining the cooperation and prosperity that could boost peace prospects in the region.


UPDATE
Jason Kenney has gleefully tweeted out that he is the new proud owner of a Sodastream. 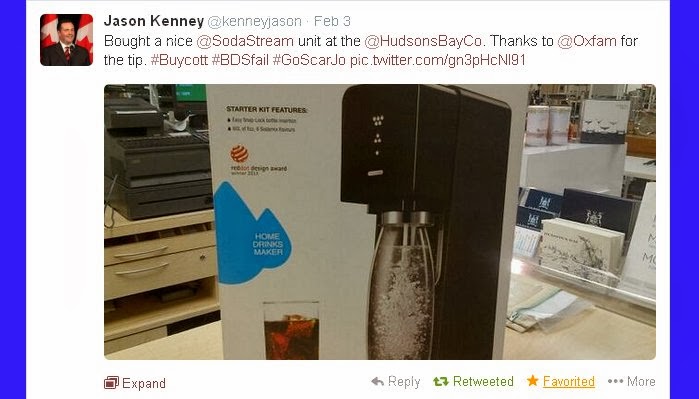 BRILLIANT! I just emailed this video to the member services director at KQED.