All too often, the Israel haters come out with a statement so offensive, so jaw-droppingly ignorant,  and so inaccurate all you can do is shake your head in wonder.

"What we have is Gaza like situation in the Yamouk camp. Every now and then there is food delivery  and people act like the siege is over. Its not over until its over... " 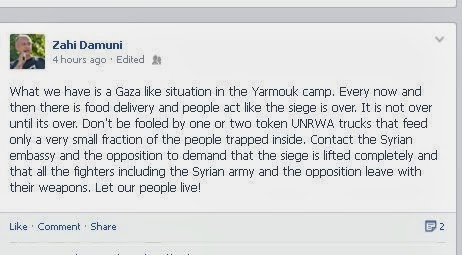 To Zahi Damuni: At least 85 people have died from hunger in theYamouk camp in Syria. 20,000 more Palestinians are starving.


“Bread is a dream for children inside Yarmouk Camp,” says Fuad, a Syrian Palestinian music teacher who tries to help bring food to the 20,000 Palestinians besieged inside Yarmouk. Standing by a barrier of sand and rubble that blocks an entrance to the camp in south Damascus, he adds that “people have been trapped in there for 185 days and are sick because they are eating weeds we used to feed our animals”.

Contrast that with Gaza where three separate surveys found "alarming" rates of obesity.  In  Gaza, food comes in regularly.  Food is also exported.

In December alone,  4522 truckloads of goods entered Gaza. 2,135 of those carried food, while the others carried humanitarian and construction materials

54 truckloads of goods were exported from Gaza, including 37.5  truckloads of strawberries,   7 of spices,  9 of flowers, and one of cherry tomatoes.

For Zahi Dumani to imply an equivalence between Syria and Gaza is a sign not only of his tenuous grasp of reality, but also of his moral and intellectual bankruptcy.

As of today, no flotillas or global marches are being planned to break the siege of Yarmouk.
Posted by Dusty at 11:11 PM