Chloe is a special young woman, who was raised to believe in the “notion of walking before G-d in an upright and just manner,” as well as the principle of speaking the truth, “no matter how unpleasant it may be to dissenting naysayers.” Also, Chloe was brought up to greatly value the study of history. One of the books in her family’s library is Josephus’s Antiquities of the Jews. As she studied history, Chloe, as an African American woman, saw many parallels between her own peoples’ history and that of the Jewish people. According to Chloe, “Both of our peoples were enslaved for extensive periods of time and so from a historical standpoint, we share that history. […] The awareness of my history and my people’s history inevitably led me to the point I am at today.” Thus, these ethics that Chloe was raised with are what prepared her to become the pro-Israel activist that she is today.


In response to this brave and articulate young woman, Seattle blogger Richard Silverstein references the most trite and offensive stereotype, posting  a despicable comment on his Facebook page "They finally did it: found a Negro Zionist: Uncle Tom is dancin' for joy!" 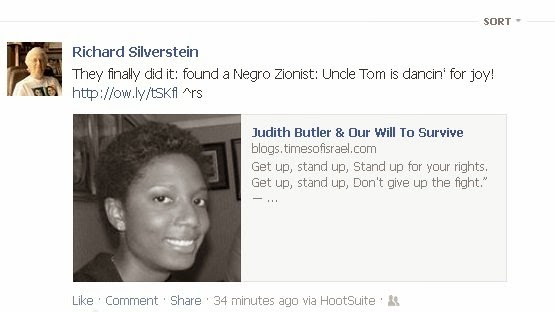 This is offensive on so many levels. Silverstein's lilting "step 'n fetch it" language is demeaning to all. That he purports to know what the African American community believes- and that he implies that they are of one mind and speak with one voice is condescending.    And his implication that Chloe is some how under the "control" of a nefarious  "They"- the implied world wide Zionist conspiracy, is again beyond the pale.  His abject ignorance of the historic context of African American  support for Zion- the historic homeland of the Jewish people (Bayard Rustin? Dr. Martin Luther King, anyone?) is appalling

This article, written by Chloe Valdary and originally published in the Times of Israel is what set off the latest tantrum from Silverstein: Discussing anti-Israel professor Judith Butler, Chloe writes:


Therefore, in the literal sense, Butler indeed advocates for ethnic cleansing. This is the extrapolation of her doctrine to its logical conclusion. Cohabitation is her highest moral order. Even if the people one is cohabiting with want to kill you. Cohabitation is the ends. Ignoring the facts on the ground, denying a people their right to an identity, and therefore discriminating against them, and lying about Palestinian society,  these are all the means. This will inevitably lead to genocide and murder, and therefore, ethnic cleansing, the exact opposite of what Butler claims to want.

But we who live in the real world filled with tyrants and dictators who desire to murder and annihilate populations from off the face of the earth are not duped by the pseudo-intellectual ramblings of a confused professor who contradicts herself at every turn. Indeed, we cannot afford to be swayed by her musings. We will not adopt her inane circular arguments at the expense of our children’s lives. We recognize anti-Semitism when we see it and it is no less odious when it comes from a prominent figure in academia.

So in this endeavor for morality and justice, we, the proud Zionist community of America, rose up. We lit up the phone lines of the Jewish Museum in New York and demanded that this event be canceled. We organized on social media, we emailed, we protested. We, this people, with a history, and a creed, and a culture, and a cause,  which we intend to perpetuate with every fiber of our being, rose up and affected positive and meaningful change. And we have every intention to continue this fight for the right to be free.

Typical Silverstein. Faced with intellectual analysis and logic, he responds with crude insults, even expressing his disbelief that Chloe could have written the post herself.

Be strong Chloe. And thank you for your efforts.  You inspire multitudes.

As of this afternoon, Richard Silverstein has removed all traces of this post from his Facebook page. Likely he  realized the delicious irony of calling  someone else an "Uncle Tom"
Posted by Dusty at 10:21 AM

Thanks for exposing Silverstein for the racist he is.

absolutely nothing surprising here. the anti-Israel bowel movement as a whole is just one big leftist hate group every bit as insidious as ultra conservatives. speaking of hate groups get a load of what MEMRI found on hizbollah TV. apparently Superman was created by Jews as a way to subvert American Society https://www.youtube.com/watch?v=5Yp2O0llRwk

Thank you, Chloe. Be strong!

This, sadly, is what conservative blacks and those who think for themselves on various issues can expect from the left. We have seen it with Clarence Thomas, Shelby Steele, Condoleeza Rice, Larry Elder, Thomas Sowell and many others. Those, like Silverstein, who engage in this kind of language prove that they are on the wrong side. They are truly despicable.

Thanks for the heads up, Schlomo.

Looks like the story on this is going viral.