Tammiphobia: Why is the harassment of Tammi Rossman-Benjamin allowed to continue on the UC campuses?

“You have enemies? Good. That means you’ve stood up for something, sometime in your life." Winston Churchill

Winston Churchill’s words are of likely of little comfort to Tammi Rossman-Benjamin, a UC Santa Cruz lecturer and fearless advocate for the rights of Jewish students on campus. Her outspoken advocacy has won her acclaim throughout the Jewish community- she was on the short list of finalists in a nationwide Jewish Community Hero contest. Its also made her enemies.

From the Fousesquak blog:  In this open letter to Chancellor Blumenthal  Tammi Rossman-Benjamin describes the level of harassment and intimidation she has faced for daring to speak her mind


“In exercising my 1st amendment rights, a campaign of harassment, defamation and intimidation has been waged against me by CJP students. They certainly have the right to disagree with me, to ask for clarification, to voice dissent.  However their chosen response is deeply disturbing and alarming. Rather than disagree with me in a way that fosters understanding or asks for clarification, I am being harassed, intimidated and defamed in ways that are causing me to fear for my physical safety”


The most current attack on Rossman-Benjamin stems from a talk she gave last summer, far away from the UC campuses.

....As you know, last summer I spoke out against campus anti-Semitism at a synagogue near Boston, in order to alert members of the local Jewish community to the problem of intimidation and harassment that some Jewish students face on college campuses today.  In my speech, I did not state, nor imply, that all Muslims or members of MSA and SJP are terrorists, or associate with terrorists. I spoke to raise awareness about a situation that exists in some instances on some campuses.  My intention was not to make a blanket statement or blanket accusations.  Yet my statements are being distorted by the Committee for Justice in Palestine to demonize me, I believe in retaliation for my speaking out against campus anti-Semitism in general, and initiating a Title VI complaint in particular.


The pattern of harassment began with an email from UC Berkeley activist Tom Pessah , urging students to formally report this off campus talk to a UC campus climate survey on intolerance.

A video has surfaced http://www.youtube.com/watch?v=UnSlbOhZgGI, showing UC Santa Cruz Hebrew lecturer Tammi Rossman Benjamin making extremely offensive comments about the Muslim Students Association and Students for Justice in Palestine groups at an off-campus event in June 2012. Benjamin singles these student activists out from all others, saying, “These are not your ordinary student groups like College Republicans or Young Democrats. These are students who come with a serious agenda, who have ties to terrorist organizations”.

If you are a UC student we encourage you to fill in this form for reporting incidents of intolerance on campus:
https://ucsystems.ethicspointvp.com/custom/ucs_ccc/default.asp

A petition was started, along with a poster campaign.  The harassment culminated in a resolution at UC Berkeley condemning  Tammi Rossman-Benjamin.  Some speculated the cowardly move to introduce the resolution at Berkeley rather than her home campus of UC Santa Cruz  was made to eliminate potential opposition and to deliberately silence the voices of her supporters at Santa Cruz.

At no point has anyone addressed the actual content of  Rossman-Benjamin's statements, instead focusing their efforts on ad hominem attacks.

Over the years, at Berkeley and elsewhere there have been close ties between various extremist groups and the Students for Justice in Palestine.  There is appreciable cross-pollination between SJP and extremist anti-Israel groups, including Al Awda and the International Solidarity Movement (ISM). Over the course of years,  SJP has hosted members of  Al Awda and the International Solidarity Movement and has promoted, participated and co-sponsored their activities.

A screen shot taken today of the resources page of SJP ( http://calsjp.org/?page_id=5 ) links directly to the International Solidarity Movement.

The relationship between the International Solidarity movement and SJP is not one-sided.  Local ISM members have been heavily promoting SJP's  Dam concert on their website as well. 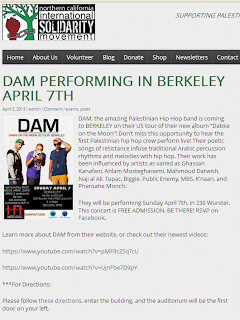 The International Solidarity Movement is not a peace group. From the ADL's backgrounder


Though ISM claims to promote only nonviolent means of resistance, it voices support for others who engage in armed resistance against Israel. The Israeli Ministry of Foreign Affairs has even warned that its activity "at times" is "under the auspices of Palestinian terrorist organizations."


Paul Larudee  who recently advocated that "armed struggle must not be discouraged, but rather made as effective as possible" is the reputed head of the  Northern California International Solidarity Movement. Paul has been photographed with Hamas leaders in Gaza, and has been hosted multiple times on campus, sponsored by the SJP. 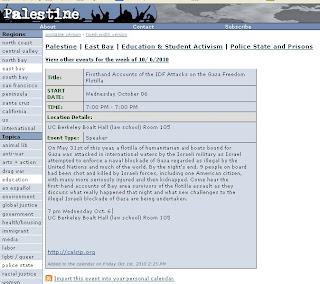 Paul Larudee  has worked closely with Deppen Webber, who once infamously tweeted "My New Years resolution is to destroy the Zionist state"

To Students for Justice in Palestine, to Tom Pessah , Rebecca Pierce and their friends:  Just as not all criticism of Israel is anti-Semitic, not all criticism of your group's tactics are "Islamophobic".  If you want to be taken seriously as a force for peace in the community, you will stop aiding and abetting extremists , stop hosting them, stop co-sponsoring events with them.  Tammi Rossman-Benjamin's words should have forced you to take a long sober look at those you've associated with over the years. Sadly, you were too distracted by your own self-righteous indignation and delusions of eternal victimization to even notice.

The arrogance of these clowns knows no limits. "Free speech for me, but not for thee"

You are right- they couldn't attack her on her home turf because everyone loves her here. Check out her "Rate My professor" scores. Consistently rates a 4.6/4.7 out of 5. Except for that one time, but everyone knows that was just Rebecca Armstrong Pierce who has a personal vendetta against Ms. Benjamin.

What a bunch of sophomoric morons! They seem to think that Peace will break out on their campus because they are so serious in their (uninformed and incurious) convictions. They really believe that all the world leaders and diplomats in the world just can't come up with the insight they have.

"PEACE" will break out as "PEACE" has broken out in Syria.

The anonymous commenter who is obviously obsessed with Rebecca Pierce needs to check their facts. That negative Rate My Professor Review was posted BEFORE she was even enrolled at UCSC.