You don't have to dig very deep to find the  hypocrisy of the BDS movement. UC Santa Barbara is currently debating divestment.   Its all about "human rights" the BDS'ers claim.  Its all about "justice".   But the "Justice" they seek is "Just us".

Have you noticed the logo of the UC Santa Barbara divestment team's Facebook page? 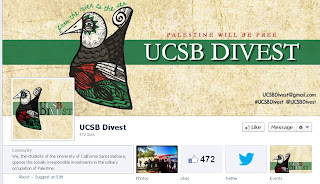 "From the River to the Sea".  From the Jordan river to the Mediterranean Sea- this isn't about achieving  an end to the "occupation". This isn't about achieve a just peace with safe and secure borders for both the Israeli people and the Palestinian people.  These are not the words of those seeking peace between the state of the Jewish people and the state of the Palestinian people. These are the words of those  who seek to destroy Israel.

You'd never know it from their public statements:

You'd never know it from the wording of the divestment resolution, which claims "Its all about the occupation"

WHEREAS: investment by UCSB in corporations that profit, from the military Occupation of Palestine, for the purpose of sharing in those profits, undermines UCSB’s commitment to fostering the well-being of our state, nation, and world, by supporting institutions that act contrary to the UCSB Mission Statement....

LET IT BE RESOLVED that ASUCSB will examine its assets and UC assets for investments in companies that a) provide military support for, or weaponry to support, the occupation of the Palestinian Territories, or b) facilitate the building or maintenance of the Separation Wall or the demolition of Palestinian homes, or c) facilitate in the building, maintenance, or economic development of Israeli settlements on annexed Palestinian territories....

No, its not about the territories captured in the 1967 war.  Its not about the future borders of an Israeli State and a Palestinian state.   With the slogan  "From the River to the Sea"  The divestment lobby, led by Students for  Just Us in Palestine at University of California Santa Barbara has made its intentions quite clear.  This is about the end of Israel.

Lets just hope that the Student senators of UCSB  realize this, too

Email ThisBlogThis!Share to TwitterShare to FacebookShare to Pinterest
Labels: divest, From the river to the sea, UC Santa Barbara

From the River to the Sea,
paleswine Will Never Be!

Y'all may want to sign it if you are tired of the bitter divisiveness the anti-Israel campaign foments on campuses.

At the end of your article you wrote "ucsb has made it's intentions very clear". It's not ucsb that has these intentions, it is the BDS system at Ucsb and all of the UC schools. I am affiliated with ucsb and I do NOT support BDS.

Thank you for the feedback. I've changed the awkward wording. BDS is a fringe movement, and certainly not one supported by the majority of students, faculty or administrators at UCSB.