A Chareidi Woman In The IDF 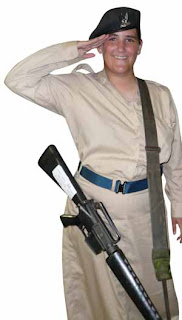 An eight-year-old girl, dressed for school in her light blue shirt and dark navy skirt, presses the elevator button as she hurries to school. When the elevator appears, she dashes inside and finds herself standing next to two Israeli soldiers with M16 rifles slung over their backs. The soldiers, sporting kippot, are her neighbor’s sons, who are heading back to the base after Shabbat. The little girl looks at them admiringly. She decides that one day she’s going to be just like them—a defender of the Jewish people.
That little girl was me.
The idea that religious Israeli Jews are growing in numbers, take from and control Israeli society, and don't contribute has become part of the anti-Israel narrative. It provides cover to lament that Israeli democracy is being undermined by people who--mysteriously--are imbued by the narrator with the traits that classical anti-Semitism attributes to all Jews.

The work of women like Fayga Marks, who find ways to live out their intersectionality in positive and bridge-building ways stands as a contradiction to these gleeful predictions of the destruction of Israel's democracy because of religious Jews.