It didn't take long for  Jewish Voice for Peace to rise to the bait.

From Sydney Levy, sent  via the Jewish Voice for Peace email  list
Last night, the President of the Associated Students of the University of California (ASUC) announced that he would not veto a UC Berkeley Student Senate resolution in favor of divestment from companies that profit from the Israeli occupation.
This is an incredible divestment win - and you helped make it happen!
In 2010, a similar vote was vetoed by a previous ASUC president. Make no mistake - this is a precedent setting win, on a high-profile campus, in the midst of a series of UC student body resolutions in favor of divestment. The growing momentum behind this movement could not be more obvious.
The ASUC President was under  a nationwide email campaign organized by the Jewish Federations of North America and the Jewish Council for Public Affairs referring to the divestment bill as "alienating and hateful." These are strong and misleading words to describe a resolution that focuses on the relation between investments and human rights.
Thanks especially to the Berkeley chapter of Student for Justice in Palestine, whose leadership, moral clarity, and tireless organizing is truly the foundation of this victory.
I am more hopeful and determined than ever to keep this momentum growing.
Thanks for making a difference when it really counted.


***********
This is the state of the BDS movement.  More importantly, this is the level of the delusion of  those at JVP.    An 11-9 vote that fractured the campus, a resolution roundly condemned by the Senate president is heralded as an "incredible victory". That statement  required mental gymnastics of Olympiad quality,  JVP.

Regarding the bill,   ASUC president Connor Landgraf  wrote " I firmly reject its one-sided narrative, and the bill's complete and utter failure to create any constructive discussion or dialogue on a complex and multifaceted issue. This bill has served to do nothing more than divide our campus, foster anger, and encourage divisiveness. The threats of violence that have been hurled at students by members of our own campus community clearly demonstrate the complete failure of this bill as a legislative tool to promote any resolution to this nuanced conflict."

Incidentally, the  ASUC president was under enormous pressure from the BDS holes not to veto the resolution, with a nationwide campaign promoted via social media by such extremist organizations as Al Awda, the  US Campaign , JVP  and others.

The moral clarity of SJP that JVP writes of?  Does it include the race-baiting and hate speech tweeted and retweeted from their twitter account and those of their allies?

Does it include dismissing attempts at peaceful co-existence as "disgusting"?

Does it include the vandalized  bus shelter? 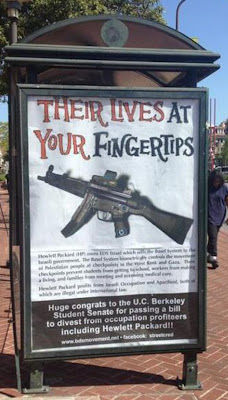 Pssst, Connor.  Its too late. Note that the vandalized bus shelter is attributed to the international BDS movement. 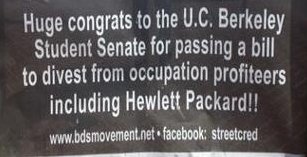 Additionally, the International BDS movement is already promoting this "victory" on their website.  (www.bdsmovement.net/2013/uc-berkeley-student-senate-passes-divestment-bill-2-10909 ) And organizations such as JVP are already using the events in  Berkeley as leverage to bully other groups into capitulating to their demands.

Connor: A personal note. I have no doubt, like most of your generation, you grew up reading the Harry Potter books.    Do you remember Dumbledore’s eulogy to Cedric Diggory, as he admonished the students “ Remember, if the time should come when you have to make a choice between what is right and what is easy....”  Connor, you picked the easy way out, and you made the wrong choice.  The ramifications of your misguided decision will  continue  to poison this campus long after your graduation.