Anonymous Website hacked. OpIsrael off to a Rollickingly Fun start

The website of Hactivist Group Anonymous has been hacked, bringing a highly ironic start to the April 7 2013 OpIsrael  Day o' Rage we've heard so much about.

Thanks so much to IsraellyCool for bring this to our attention.

Of of right now, the OpIsrael webpage plays a lovely version of Hatikvah, and runs MEMRI clips with Wafa Sultan.  It also offers these important facts about the conflict

1. Israel became a nation in 1312 BCE, two thousand years before the rise of Islam

2. Arab refugees in Israel began identifying themselves as part of a Palestinian people in 1967, two decades after the establishment of the modern State of Israel.

3. Since the Jewish conquest in 1272 BCE, the Jews have had dominion over the land for one thousand years with a continuous presence in the land for the past 3,300 years.

4. The only Arab dominion since the conquest in 635 CE lasted no more than 22 years.

5. For over 3,300 years, Jerusalem has been the Jewish capital Jerusalem has never been the capital of any Arab or Muslim entity. Even when the Jordanians occupied Jerusalem, they never sought to make it their capital, and Arab leaders did not come to visit.

9. In 1948 the Arab refugees were encouraged to leave Israel by Arab leaders promising to purge the land of Jews. Sixty-eight percent left without ever seeing an Israeli soldier.

10. The Jewish refugees were forced to flee from Arab lands due to Arab brutality, persecution, and slaughter.

12. Arab refugees were intentionally not absorbed or integrated into the Arab lands to which they fled, despite the vast Arab territory. Out of the 100,000,000 refugees since World War II, theirs is the only refugee group in the world that has never been absorbed or integrated into their own people's lands. Jewish refugees were completely absorbed into Israel, a country no larger than the state of New Jersey.

13. The Arabs are represented by eight separate nations, not including the Palestinians. There is only one Jewish nation. The Arab nations initiated all five wars and lost. Israel defended itself each time and won.

14. The PLO's Charter still calls for the destruction of the State of Israel. Israel has given the Palestinians most of the West Bank land, autonomy under the Palestinian Authority, and has supplied them.

15. Under Jordanian rule, Jewish holy sites were desecrated and the Jews were denied access to places of worship. Under Israeli rule, all Muslim and Christian sites have been preserved and made accessible to people of all faiths.

16. The UN Record on Israel and the Arabs: of the 175 Security Council resolutions passed before 1990, 97 were directed against Israel.

18. The UN was silent while 58 Jerusalem Synagogues were destroyed by the Jordanians.

19. The UN was silent while the Jordanians systematically desecrated the ancient Jewish cemetery on the Mount of Olives.

20. The UN was silent while the Jordanians enforced an apartheid-like a policy of preventing Jews from visiting the Temple Mount and the Western Wall. 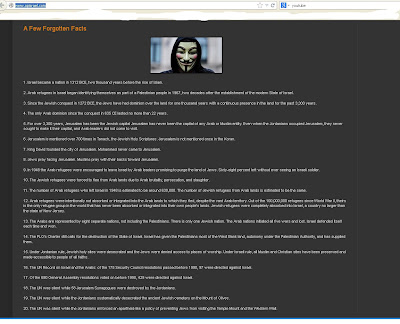 The hacked site bears the message: This site hacked by : EhIsR #opisrael are nothing!! Now is the time to know the truth about Israel.

EhIsR- I owe you a beer for this one.  Good job.

good job! this is going on my Facebook page.