The Prisoners Diaries: Palestinian Voices from the Israeli Gulag 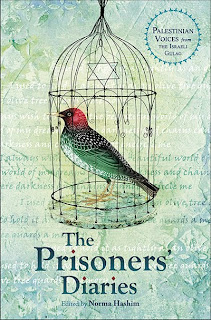 The Prisoners: Diaries: Palestinian Voices from the Israeli Gulag will be released later this week. It's an autobiographical  narrative of 22 Palestinian prisoners' experiences in Israeli jails compiled from interviews with prisoners released in the Gilad Shalit prisoner exchange. Norma Hashim is the editor.

No one expects it to be more than anti-Israel agitprop.

Looking for a more realistic glimpse into life in the Israeli prison system? You need look no further than MSNBC's Lockup World tour, which took its' cameras inside three Israeli prisons last year, examining  Rimonim, Israel’s largest maximum-security prison; Neve Tirza, a facility for women, and Hermon, known as “the largest therapeutic community in Israel."

Rimonim from the Times of Israel:

With 1,200 prisoners, Rimonim allows family members to live communally. Some Israeli-Arab “crime families” share a cell of up to six people, with the largest incarcerated Bedouin family boasting twenty members housed in one wing. The families are given leeway to manage their own affairs, a key factor contributing to prison security and inmates’ well-being, according to Rimonim Prison Commander Chen Benderli.

New Rimonim inmates are permitted to bring their clothes, appliances and other personal items with them to prison. Most inmates cook for themselves in communal kitchens, and prison staff eat food prepared by inmates. Jewish and Arab inmates socialize freely with guards, shaking hands and trading jokes in what Lockup producer Kimberly Greenhut called “a very social and very festive environment.”

Jewish and Arab inmates socialize freely with guards, shaking hands and trading jokes in what one Lockup producer called ‘a very social and very festive environment’“I feel like I am in a hotel,” says one Israeli-Arab inmate as he shows the camera around a spacious cell with kitchen equipment, bookshelves and private bathroom area. “Nothing is lacking.”


The report from Prison Lockup World tour was confirmed earlier this year when a clip from an Israeli prison surfaced. This clip, caught on a smuggled in cell phone camera shows life in Eshel  prison.  This is an engagement party for convicted terrorist   Samar Abu Kwick Music. Snacks.  Friends.  Samar Abu Kwick was convicted of murdering Sarah Lisha , Elad Valenstein and Amit Zana, in a 2000 terror attack at the Halamish junction in the West Bank.  Kwick is serving three life sentences.

The Times of Israel continues:


Defying the atrocity narrative, more than one convicted Hamas terrorist has been known to post on Facebook from a personal 3G smartphone, showcasing an upgraded cell with soccer banners, pets and stereo equipment. When not enjoying satellite Arab television, other “security” inmates use smartphones to help friends pick out clothes to bring them in prison. Many of Israel’s 5,000 Palestinian prisoners receive living stipends totaling $100 million a year from the Palestinian Authority — if they were convicted of violence against Israelis, that is.

Inmates of all backgrounds interviewed by Lockup appear more candid and hopeful about their future than prisoners typically encountered by the show, producers noted. “They save lives here” and “I discovered my soul in prison” are typical comments of Hermon Prison inmates, many of whom are shown engaged in academic learning or practicing a trade.

Israel’s prison system owes much of its current status to improvements undertaken during the 1990s, following passage of Israel’s Basic Law for Human Dignity and Liberty. The so-called “rights revolution” and an activist High Court helped transform Israeli prisons into facilities with relative harmony and ample rehabilitation opportunities, as well as places to which fewer inmates return for second stays.
“An enlightened society is judged by the treatment of its prisoners,” said then-High Court President Aharon Barak. “The prisoner has committed a crime and has been punished accordingly; his liberty has been taken away, but the human essence still remains. The prison walls must not come between the prisoner and human dignity.”

Remember this when The Prisoners’ Diaries: Palestinian Voices from the Israeli Gulag  is read at a bookstore near you.