Something there is that doesn't love a wall

Before I built a wall I'd ask to know
What I was walling in or walling out,
And to whom I was like to give offence. 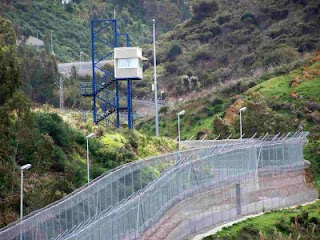 "Spain built fences to keep out Moroccans; India is walling off Kashmir and Bangladesh; South and North Korea share the most heavily fortified border in the world. Elsewhere, Saudi Arabia has an epic wall project; the glitz, wealthy Arab sheikhdoms are closing the border with dirt-poor Oman; Russia is considering walling off Chechnya; Western Sahara has “the Wall of Shame”; Cyprus is entirely divided by walls; Belfast is a fenced city of brick, iron and steel barriers, and even the ultra-liberal Nederlands built a fence around the Hook of Holland.

But only Israel’s barriers have been condemned by the International Court of Justice, only Israel’s fences have received round-the-clock coverage on CNN and front page stories on the New York Times, only Israel’s checkpoints are turned into the meccas of “peace” activists and are condemned by Western public opinion as an instrument of harassment used to subjugate a proud “native” people, whose only crime is wanting freedom, or “liberation.”
While foreign fences keep out livestock and refugees from neighboring countries, only Israel’s fences and checkpoints have a truly humanitarian reason: to secure the civilian population's right to life. Only in Israel barbed wire, patrol roads, sand tracking paths, video cameras and electronic sensors are used to prevent a restaurant, a shopping mall or a hotel from being turned into carpets of human bodies."

From the Jewish Virtual library on the role of the security barrier in savings lives:

"During the 34 months from the beginning of the violence in September 2000 until the construction of the first continuous segment of the security fence at the end of July 2003, Samaria-based terrorists carried out 73 attacks in which 293 Israelis were killed and 1950 wounded. In the 11 months between the erection of the first segment at the beginning of August 2003 and the end of June 2004, only three attacks were successful, and all three occurred in the first half of 2003.
Since construction of the fence began, the number of attacks has declined by more than 90%. The number of Israelis murdered and wounded has decreased by more than 70% and 85%, respectively, after erection of the fence.
Even the Palestinian terrorists have addmitted the fence is a deterrent. On November 11, 2006, Islamic Jihad leader Abdallah Ramadan Shalah said on Al-Manar TV the terrorist organizations had every intention of continuing suicide bombing attacks, but that their timing and the possibility of implementing them from the West Bank depended on other factors. “For example,” he said, “there is the separation fence, which is an obstacle to the resistance, and if it were not there the situation would be entirely different.”
The value of the fence in saving lives is evident from the data: In 2002, the year before construction started, 457 Israelis were murdered; in 2009, 8 Israelis were killed."

Israel's security barrier is a non-violent way of saving lives. It is moveable. It is temporary, and it will come down when there is a real and lasting peace in the land. In the absence of peace, it provides security and it saves lives every day.
Posted by Dusty at 8:52 AM