Israeli gives up dream to scale Everest to save Turkish climber

A traffic jam on Mount Everest turned deadly last weekend, with reports of seven climbers perishing on the mountain. Weeks of bad weather had prevented climbers from summit attempts until Saturday. When the weather cleared, an estimated 150 people rushed to reach the peak.

But still, there were stories from Everest that showed the triumph of the human spirit.

A 24 year old law student from Israel, Nadav Ben-Yehuda was just 300 meters from the summit of Everest when he noticed a Turkish climber Aydin Irmak lying unconscious on the ground.

From YNET
"People passed him by and didn’t do a thing.... All I thought about is that I can save this person – and that’s what I did," Ben-Yehuda noted.

"I attached him to my harness, and we started the descent. It was very hard to carry him because he was heavy. At times he would gain consciousness, but then faint again. When he woke up he would scream in pain, which made it even more difficult."

It took nearly 10 hours until they arrived at the closest base, located at an altitude of 7,900 meters.

"Expressing his gratitude, Irmak, 46, told Yedioth Ahronoth, "If Nadav wasn't there, I would have died on the mountain. It was a miracle.

"I remember falling down. I woke up with Nadav standing over me and shouting my name. Nadav did a great thing. He built a bridge between Turkey and Israel, and our leaders can learn a lot from him. Politics doesn’t matter much, what matters is human nature. 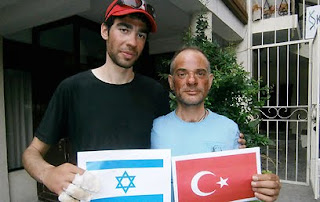 "I may have missed the summit, but I gained a new brother. Who knows, maybe one day we'll climb the Everest together," Irmak noted.

Meanwhile, in their living room in Rehovot, Nadav's parents – Yoram and Dorit – are bursting with pride. "He did the right thing, no doubt," said Yoram. "This is the education he received not only at home but also from his military service in Golani – a friend in need comes first."

I've been wondering how the Turkish papers are framing the incident. Perhaps something along the lines of "Israeli prevents Turkish climber from reaching Everest summit" ?
Posted by Dusty at 9:54 PM

I have to say, I'm shocked to hear that people kept going past the Turkish guy. What kind of a hobby is this, where if someone is unconscious, you just leave him on the side of a mountain and keep going?

This is a touching, deeply moving, story. Nadav is much higher than the Summit of Mt. Everest in my heart and mind. I am humbled.

I feel the same way. Nadav walked for hours carrying a virtual stranger on his back- his fingers were so badly frost-bitten they may need to be amputated. He unhestitantly gave up his dream to save a human life. And in the face of the dozens who chose the opposite path- whose quest for the summit of Everest made them blind to the suffering of others his choice was truly remarkable