A comment in the post "Real Children's art from Gaza" implies that the Oxfam drawings from Gaza were perhaps fraudulent, since they showed homes with gables. Indeed many homes in the Middle east do have flat roofs- as an extension of the living space, and as a refuge from the heat.

But as this June 2007 Philip Rizk photo shows, flat roofs are by no means universal in Gaza. This photo of Palestinian President Mahmoud Abbas’s house in Gaza City, appeared in the Electronic Intifada. 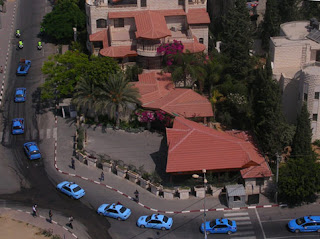 Here it is, from a different angle 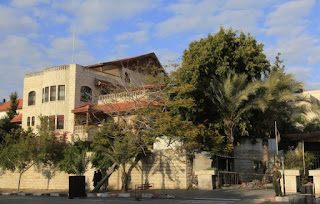 Rather nice, huh? Not what you'd expect from the World's largest concentration camp, is it?
Posted by Dusty at 11:27 AM

Email ThisBlogThis!Share to TwitterShare to FacebookShare to Pinterest
Labels: Abbas home in gaza, Homes in Gaza

a perfect target for a drone strike.

I hope I did not offend the sites bloggers. I was just making an observation on the roof lines and my experience with Gaza comes from Israeli media photos and I usually only see flat top roofs.

I enjoy you blogs

Kids don't necessarily draw what they see around them. Books can override real life fairly easily. When I was in elementary school, f you asked me to draw 'a house', I drew not a flat-topped San Francisco single-family dwelling, but a gabled house with two or four windows to either side of the front door, just like the ones in picture books.