An exhibit of children's art from Gaza is currently on exhibit in London, at the London Muslim Centre. 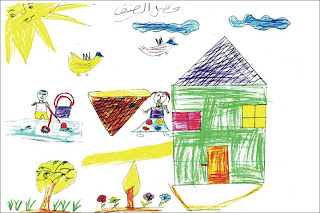 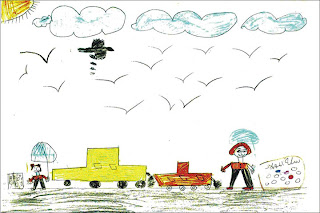 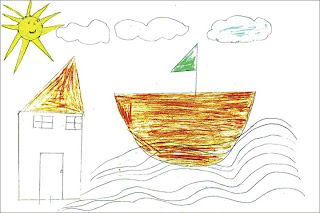 "Gaza's children reveal their hopes and fears – in pictures
The children of al-Zarqa, one of the Gaza Strip's poorest areas, have been affected by a conflict outside their control. An exhibition of drawings made by primary school children from the area, which was damaged during a three-week military assault in 2009, is on show in Whitechapel. It highlights a collective yearning for a clean, safe neighbourhood"


So, does anyone remember the controversial Gaza art exhibit "A child's view of Gaza" from Oakland of last year?

Part of the controversay was, well, the drawings seemed rather, professional.
From FresnoZionism: 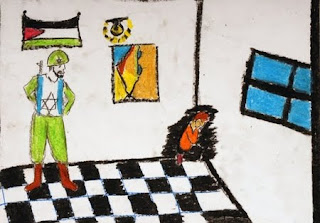 ".....The Middle East Children’s Alliance (MECA) claims that the pictures were drawn by children from 9 to 11 years of age. That’s nonsense. Look at the drawing above. Note how the viewer’s eye is drawn to the slightly off-center focal point, the child cowering in the corner, the suggestion of despair evoked by the black shading around him. Look at the effective representation of the soldier’s face with a few strokes. Look at the sureness of the lines, the bold strokes. Whoever drew this was either an adult artist or a remarkable prodigy, sophisticated both artistically and politically." 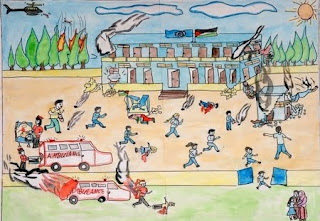 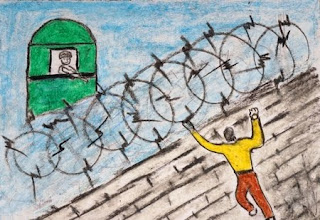 "The paintings (color drawings) are highly sophisticated especially in relationship to detail. Did you see the barbed wire? Also, there is a carefully drawn Star of David in each work. The authenticity of the painting is remarkable for a child’s hand. The drawing of the planes and helicopters, the man in the tower, the dynamic brushstrokes that are well conceived and controlled all seem to project a more mature approach to art. Could these “children” be in their late teens, college age, or young adults [MECA says they were 9 to 11 years old]? According to the the quote, “much of the artwork was produced by children.” I wonder how “much”? Also, it is possible that the “children” were directed by an adult who supervised and perhaps completed the initial drawing."

Artist and teacher Juniper in the Desert commented...

"As an artist and teacher I can safely say... They are faked to look like children, but the detail is too pointed and expert - the helicopters for instance. The proportions and stance of the woman and child are a creation of a professional. The boot and flag, the lines are not those of a child.?" 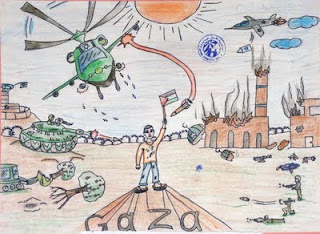 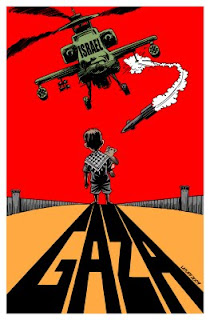 And the Elder of Ziyon pointed outremarkable resemblances between the "children's art" and American anti-Israel propaganda posters.

"I've been an avocational artist my entire life and have some experience with the styles of amateurs. The sureness of the color application -- especially in the dense, complicated scenes (which are obviously all done by the same person) -- is at variance with the primitive (faux-primitve, frankly) nature of the sketching. It's the use of color especially that gives it away to me as the product of an older person. But the complexity of the composition in the big scenes is uncharacteristic of 9-11-year-olds as well. Certainly the politicized content is atypical.

The sureness of stroke in these pictures is something you almost never find from a very young artist. The biggest giveaway I see in this regard is not actually in the complex, refined drawings, but in the more primitive ones. For example, the confidence with which the concertina wire is sketched in, in one of the primitive crayon drawings, is just not characteristic of the young. I was accounted an exceptional artist in my K-12 years, and I couldn't have achieved that confident, bold, rapid-stroking effect until I was at least 16. It's one of the hardest things to do, and you really do lack the coordination and focus for it when you're younger. A kid would draw that laboriously, with a lot of short, stubby strokes strung together -- or he would simply achieve a cruder, less symmetrical and more tentative effect."

Compare and contrast the drawings exhibited in London, with those from the controversial MECA exhibit. Do you really still believe that the Middle east children's Alliance drawings were made by children?
Posted by Dusty at 10:58 AM

I have never been to Gaza but from what I have seen in the news the houses don't have pointed or (pitched?) roofs. That seems like someone from the west's idea of a home

Oxfam is an internationally respected organization, and they organized and documented the exhibit. Unlike the Middle east children's Alliance exhibit, the children's writing in the Oxfam exhibit is in Arabic.

It's a never-ending propaganda war against the Jews of the Middle East.

This is why it is so hard to give credibility to horrendous stories coming out of Judea and Samaria (formerly known as "the West Bank") concerning vicious settlers who rip Palestinian olive groves out of the earth with their bare fangs.

The propaganda and projection of hatred is just endless.