Like many anti-Israel groups the International Jewish Anti-Zionist network is little more than a website and an email list, providing anonymity and a "Jewish" cover to their actual financiers and handlers. In the case of the IJAN, their primary purpose appears to be "Jew-washing" events that cross the line into anti-Semitism. Yes, as hard to imagine as it might be- there are events that even Jewish voice for Peace won't touch. Locally, the IJAN works closely with the Arab Resource Organizing Center and uses their facilities to host events. The IJAN has co-sponsored a talk accusing Israel of deliberately irradiating Mizrachi refugees. They have hosted notorious anti-Semite and Global march to Jerusalem organizer Feroze Mithaborwala. Most recently the IJAN recently paraded Hajo Meyer, a long time anti-Israel activist and Holocaust survivor on a widely discredited 12 city tour "Never again is for Everyone"

Hajo Meyer carries the endorsement of ex-KKK leader David Duke, and Hatem Bazian, a UC Berkeley faculty member with a lengthy resume of anti-Israel activities. At the IJAN sponsored tour at Rutgers University New Jersey, event organizers led by Sara Kershnar (Shown below, shortly before her arrest for interrupting a talk at the San Francisco Jewish Community Center) suddenly instituted an admission fee (in violation of university policy) to discourage Jewish pro-Israel students from entering the event. 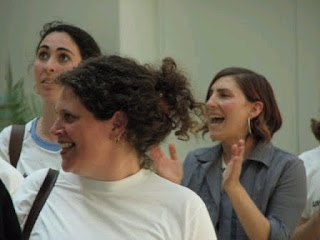 At the IJAN "Never again" talk at DePaul University in Chicago , attendees reported:

"The organizers created an intimidating atmosphere. One attendee likened it to a Ku Klux Klan rally. No audience members were allowed to record, film, or photograph the speakers. Members of Students for Justice in Palestine (SJP), which sponsored the event, patrolled the aisles looking for “contraband” recording devices. This created a tense atmosphere, which one audience member described as fascist."

"The speakers vilified current peace efforts and praised the terrorist group Hamas. They repeatedly attacked the moderate Palestinian Authority for “collaborating” with Israel by engaging in peace talks and extolled Hamas as “the democratically elected representatives of the Palestinian people." They attacked Israel’s peace treaties with Egypt and Jordan, with Bazian claiming that the treaties were simply an Israeli plot to “extend its strategic borders all the way up to Iraq.”"

"Hajo Meyer made the Nazi-Israeli equation more explicit. Exploiting his status as a Holocaust survivor, he compared IDF soldiers to Auschwitz guards. He denigrated Jews and Judaism. “The Jewish people are not a civilization,” he charged. The only religion that pro-Israel Jews share is the Holocaust religion. . . . They cannot claim they are Jewish, so therefore they had to invent the Holocaust religion, that is, with its high priest Elie Wiesel,” he said.

From the ADL:
"The tour is the latest effort by anti-Israel activists to exploit the sacred memory of the Holocaust for the purpose of painting its victim, the Jewish people, as the "new" oppressor in the form of Israel. Anti-Israel activists have regularly used Holocaust language to demonize and vilify Israel, including referring to Israeli soldiers as Nazis and comparing Israel's blockade of Gaza to a "concentration camp" or "ghetto."

Exploiting the holocaust? Why would anything from the IJAN surprise us?

We pledge to: Oppose Zionism and the State of Israel

Zionism is racist. It demands political, legal and economic power for Jews and European people and cultures over indigenous people and cultures. Zionism is not just racist but anti-Semitic. It endorses the sexist European anti-Semitic imagery of the effeminate and weak “diaspora Jew” and counters it with a violent and militarist “new Jew,” one who is a perpetrator rather than a victim of racialized violence. Zionism thus seeks to make Jews white through the adopting of white racism against Palestinian people…

And now in an act of staggering and mind-blowing hubris, those nefarious holocaust exploiters at the International Jewish Anti-Zionist network, are, wait for it... accusing The Horowitz Freedom center of exploiting the Holocaust.

"The Holocaust began with Boycotts of Jewish stores and ended with death camps. The calls for a new Holocaust can be heard throughout the Middle east and in Europe as well. In the wake of the murders of a rabbi and three Jewish children in Toulouse, it is time for supporters of the boycott, divestment and Sanction Israel Movement (BDS) to ask themselves what they did to contribute to the atmosphere of hate that spawned these and the murder of Jews"

And the IJAN responds (accompanied by a ubiquitous petition and request for money):
Take Action against Slander and Misuse of the Nazi Holocaust

"On April 24th, the New York Times published a dangerous and slanderous ad paid for by the David Horowitz Freedom Foundation. The ad invokes the Nazi holocaust in order to attack supporters of BDS including several professors (see William Thompson’s powerful response here). It is incumbent upon Jews of conscience and others who share our commitment to justice to speak out in defense of those who bravely promote justice for Palestinians and against the egregious misuse of the legacy of the holocaust."

The IJAN - a group that paraded a decrepit anti-Israel activist though 12 cities to exploit his status as a holocaust survivor is complaining about the "misuse of the Holocaust" It is, to paraphrase Norman Finklestein "Beyond Chutzpah"
Posted by Dusty at 11:34 AM

the deranged state of mind of these people knows no limits it would seem.