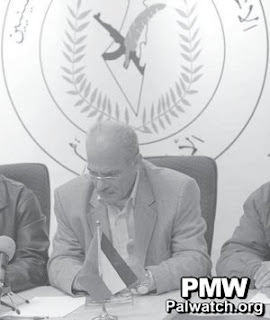 From Palestinian Media Watch:
At a meeting of the General Union of Palestinian Writers last week, the union's logo was on display, showing a rifle and a quill over a map of "Palestine" that replaced Israel.

Rejecting Israel's right to exist within any borders. Glorifying violence. Does any think that the General Union of Palestinian Writers is a peace group? Does anyone believe this organization supports a homeland for the Palestinian people living side by side and in peace with a homeland for the Jewish people?

Perhaps its not surprising that this group has condemned writers throughout the world for traveling to Jerusalem to attend the International Writer’s Festival in Jerusalem. What might surprise you however, is that this group has gone one step further- and as actually singled out for derision individual writers who have decided to seek out Palestinian voices

From an article in the "Electronic Intifada" (No, I'm not going to link to it)

"Not only are some of these writers – who crossed the Palestinian picket line – like the American writer Tracy Chevalier and the Bosnian writer Aleksandar Hemon, still participating in this shameful festival, they have also asked the director of the Festival, Uri Dromi, to arrange for them to meet with 'local’ Palestinian writers in Ramallah, and to tour East Jerusalem to see the Palestinians. This Orientalist tendency to get acquainted with 'the locals’ as objects of colonial voyeurism, and through colonial intermediaries, should be met on the Palestinian side with condemnation and boycott."

"Promoting Jerusalem as a legendary city that is quintessentially Jewish, extending from 'The Tower of David’ to the 'Judean Desert’, and the participation of top Zionist writers like Amos Oz, A. B. Yehushua, David Grossman, and Etgar Keret, along with Arab writers who don’t write in Arabic such as Sayed Kashua and Bouallam Sansal, turn this festival into a carnival of irony that should be boycotted for aesthetic, cultural, and political factors."

"Established by the Jerusalem Foundation, Mishkenot Sha'ananim is an international cultural and conference centre in Jerusalem, serving artists and encouraging creative expression. The centre embraces a pluralistic perspective and interdisciplinary approach and sees as its goal to promote Jerusalem as a city of dialogue and tolerance.

Situated in a famous historical building dating from 1860, Mishkenot Sha'ananim was the first residential building established by Sir Moses Montefiore for Jewish residence outside the Old City walls. The structure exudes both charm and inspiration, offering a magnificent view of the Tower of David, the Old City walls and the Judean Desert. "

So, once again, the truth-challenged Electronic Intifada is wrong. There's not a word about promoting Jerusalem as a "legendary city that is quintessentially Jewish". And they've completely missed the "dialog and tolerance part".

Attended by over 60 writers from Israel and around the world, the literary encounters, readings, workshops and discussions, The Third International Writers Festival at Mishkenot Sha’ananim features respected authors from countries as diverse as Algeria and India, Italy and Argentina, Bosnia and the U.S. The festival will be held in various locations in the capital including the cinemateque, Anna Ticho House Museum and the Yellow Submarine club.

By now, it must be clear to everyone that the overarching goal of Boycotts, Sanctions and Divestment (BDS ) is not peace or co-existence. The tactic serves to isolate and condemn those who believe in these out-dated principals. The goal of BDS is the isolation and the elimination of Israel as the home of the Jewish people.