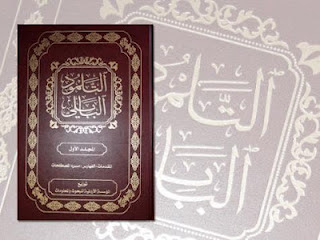 Translating the Talmud into a new language is no light matter. It's a long shelf full of books, made up not of a single text, but of interlocking commentaries, and written in a terse, legal Aramaic in which lengthy arguments are reduced to a sort of telegraphic shorthand, and then unfolded by generations of scholars to lengthy arguments once more. This is not the latest Harry Potter book, or a set of directions for an IKEA desk, this is a challenge for a translator on a par with Finnegans Wake, but more of it. Much more.

So the news that the entire Bavli has been translated and published in Arabic was fairly big news in the scholarly world. It does raise some questions though. Who actually needs a Talmud in Arabic? English, sure, I myself have learned a little using Adin Steinsaltz's spectacular life's work of a translation. Hebrew translations are available, and French, Russian, and Spanish. But more than sixty years after the founding of the State of Israel triggered the expulsion of the ancient Jewish communities of the Arabic-speaking world, you have to wonder how many potential learners are out there who cannot read Aramaic, Hebrew, English or French, and must have an Arabic translation.

Don't ponder that question for too long. The translation is not for us.

As the ADL reports, the purpose of this translation, made explicit in its introduction, is to present the Talmud as a deeply racist text, which reveals the deep racism of Jews, and has formed the deeply racist State of Israel. Racist all the way down, and therefore completely illegitimate as a nation.

The ADL quotes the introduction: “These texts confirm the racist and hostile perception toward the non-Jews, especially those who threaten the ‘chosen nation’ and stand in the way of its ambitions and hopes. There is no doubt that Israel is the best example of this racist position, both in the level of its daily crimes against the Palestinians and the level of its rejection and contempt for international resolutions and laws. For what applies to other countries in the world does not apply to contemporary Israel, as it is unique...Jews, according to this racist position [of the Talmud], are permitted to do what is not permitted for non-Jews.”

The ADL article concludes: The conclusion of the introduction neatly merges the publishers’ anti-Semitic and anti-Israel proclivities: “The Talmudic heritage has a significant impact on the formulation of Jewish identity based on holy [principles of] racial isolation…It [the Talmud] also established the extreme positions that advocate hatred toward non-Jews, the violation of their rights and looting of their lands and property.” The publisher then refers to the Zionist movement’s alleged “crimes” against the Palestinian people as an example of the Talmud’s validation of racist policies.

So, who commissioned this?

MESC, established in 1991, is a Jordan-based political think tank that focuses on the Middle East and North Africa. The Center has a special unit on Israeli affairs, which monitors Israel, Zionist organizations and Hebrew-language media. MESC is highly critical of Israel, and organized a conference last year on the Palestinian unilateral declaration efforts to which they invited senior Muslim Brotherhood leaders as well as Hamas officials.

Al-Jazeera has specifically promoted this book as a contribution to the “establishment of Arabic language Jewish studies” as well as claiming that the translation “identifies the features of the Jewish character that blend elements of racial superiority with Mosaic teachings.”


Nicholas Donin's legacy lives on. This is an old tactic, relatively newly adapted to a new political goal, the delegitimization of Israel. Anyone who has spent much time dealing with hard-core Israel-haters has probably encountered this already, the desperate attempt to take Jews out of time and space--out of history--and reduce them, against any rational interpretation, to a people driven to conquest and oppression by a scattering of quotations taken out of context from a thirty-seven volume legal code.

It's a sickening tactic, but clearly, seen as effective enough for MESC to invest the time and the money to commision this translation, and that worries me.
Posted by Makabit at 11:40 AM