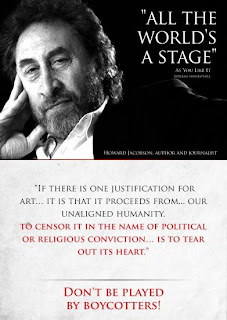 Next week the historic London Globe Theatre will feature Israel's Habima Theater Company in "The Merchant Of Venice". Habima will be performing as part of the 37-play Globe to Globe Shakespeare festival. Having failed in their attempt to censor the production, anti-Israel bullies have threatened to disrupt the sold-out Hebrew-language play .

In response, the Globe is increasing its security, reserving the right "to refuse admission to anyone we have reason to believe may cause a disruption" and that "any objects or material which could be used in disrupting the performance will be deemed prohibited items".

A Palestinian theater group from Ramallah, Ashtar was at the Globe theatre earlier this month, performing 'Richard II', without incident. Human rights activists apparently turned a blind eye to Palestinians arrests of journalists and bloggers and persecution of gays and minorities.

Increasingly, as the BDS movement falters and stalls, we are seeing more of these extremist and counter-productive bullying tactics from anti-Israel activists.

"As with most BDS tactics, this type of bullying almost seems designed to turn off those whom the boycotters claim they are trying to convince, demonstrating the fanaticism and rudeness of those who adhering BDS principles. And when such behavior has been rightly wrapped around the neck of the BDS movement as a whole, it has helped continue the process of de-legitimizing the entire effort to de-legitimize the Jewish state."

“If there is one justification for art - for its creation and its performance - it is that art proceeds from and addresses our unaligned humanity.

“Whoever would go to art with a mind already made up, on any subject, misses what art is for. So to censor it in the name of a political or religious conviction, no matter how sincerely held, is to tear out its very heart.

“For artists themselves to do such a thing to art is not only treasonable; it is an act of self-harm.”
Posted by Dusty at 11:01 AM

Wanna help? Use the hashtag #Loveculture and declare your support for Hadima @the_globe.