Al Awda: And the War continues 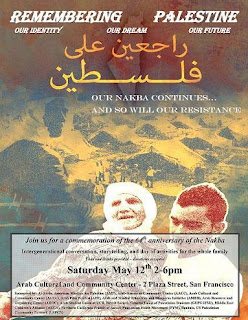 If its May, it must be Nakba season. And true to form, a variety of anti-Israel events are scheduled throughout California . Our local Al Awda's promotional poster carries the promise of continued "resistance"- a thinly veiled threat of violence.

The theme of continued violence carries over to the Southern California Al Awda, who have declared No Return = No Justice = No Peace!, and have scheduled a day of rage at the local Israeli Consulate on Wilshire Blvd.

"Of all Zionist war crimes, none was as massive as that committed in the 1948 era with the wholesale expulsion of the Palestinian Arab people from their homes, towns and villages, as part of a calculated plan to uproot an entire population and empty the land of Palestine from its indigenous inhabitants.

The Nakba ("Catastrophe" in Arabic) of 1948 refers to this planned ethnic cleansing when the vast majority of Palestinians were ruthlessly attacked, massacred and driven from their homes into refugee camps by Zionist terror groups, and not allowed to return in violation of international law...."

And of course, he is wrong.

What Israelis, Jews and most of the world celebrates as Israel's independence, people opposed to Israel's birth commemorate as the "Nakba"- the Catastrophe. Roughly 650,000 Arabs were displaced in Israel's war of Independence. The vast majority fled without seeing a single Israeli soldier. Thousands of wealthy Arabs left in anticipation of a war. Others responded to a call from Arab leadership to leave, and were promised a quick return following a victory over Israel. That victory never came. A handful were expelled, but most simply fled to avoid being caught in the war.

A 1948 British police report from Haifa explained that “every effort is being made by the Jews to persuade the Arab populace to stay and carry on with their normal lives, to get their shops and businesses open and to be assured that their lives and interests will be safe.” In her autobiography, Golda Meir writes about going to Haifa to try to persuade the Arabs to stay.

Thousands of these handbills were distributed in Haifa, in an effort to convince the Arabs not to leave. 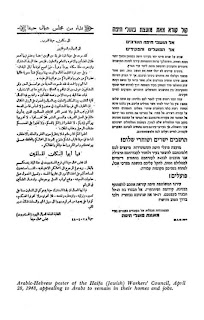 Israel's declaration of independence- that most Zionist of all documents states

"WE APPEAL - in the very midst of the onslaught launched against us now for months - to the Arab inhabitants of the State of Israel to preserve peace and participate in the upbuilding of the State on the basis of full and equal citizenship and due representation in all its provisional and permanent institutions. "

The true catastrophe- the real Nakba- is that after 64 years Al Awda continues to wage a war on the Jewish state- a war of words, a war of hate, a war of agitprops.
Posted by Dusty at 10:23 PM