Cyberbullying: The new trademark of the BDS crowd.

Does the "B" in BDS stand for Bullying?

Dr. Jess Ghannam is one of our local chameleons. As a Clinical Professor of Psychiatry and Global Health Sciences in the School of Medicine at UCSF Medical Center, Dr. Ghannam is clearly one of the one 1 %. Yet, he's been spotted frequently removing his tie and suit- jacket on his way to participate in demonstrations, often donning a jaunty Che style beret in an attempt to fit in with the crowd. Dr. Ghannam will trot out his academic and medical credentials when its convenient- he is a member of a California Scholars for Academic Freedom (a group that is obsessed solely with allowing academics the freedom to demonize Israel at taxpayers expense), but he's equally at home playing anarchist at International ANSWER or Al Awda meetings.

Dr. Ghannam just sent out a mass email via the extremist Al Alwda email list, encouraging the cyberbullying of the Red Hot Chili Peppers, who are scheduled to play in Tel Aviv, Israel later this year, complete with pre-packaged tweets to RT and RT ad nauseam .

Cyberbullying is being used with increasing frequency against any artist that dares to schedule a tour in the only democracy in the Middle east.

From an article by Jerome Reilly in the Independent-Ireland

"Justice Minister Alan Shatter has launched a blistering attack on the Irish Palestinian Solidarity Group (IPSG), accusing them of "cyberbullying" the folk group Dervish who were forced to pull out of a planned concert in Israel.
The band cancelled the tour planned for June, citing an "avalanche of negativity" and "venom" directed towards them on social media websites.
Shatter, who is Jewish, said, "It is a great pity that the bullying tactics of the IPSG worked."
He added that the IPSG's appeal to human rights "ignores the constitutional rights of Irish citizens and those who live in this state to get on with their lives, to travel and to perform around the world free from bullying, intimidation and discrimination."
"It is particularly extraordinary that the orchestrated campaign targeted at Dervish occurred at a time when thousands have lost their lives in Syria and the IPSG have remained silent about the crimes against humanity."

The website BDS gone bad has done an expose of anarchist and cyberbully Tali Shapiro. Tali apparently writes personal letters to bands calling herself a "long time fan". The site asks "Why is it then she’s not even the fan band’s fan on Facebook untill it’s time to call for divestment? A quick browse through her profile shows that she almost only likes Bands and artists who announced a concert in Israel,soon after the announcement, in order to fill their public pages with calls for boycott." At least 37 out of 50 Artists that Tali Shapiro "likes" are ones that announced concerts in Israel! 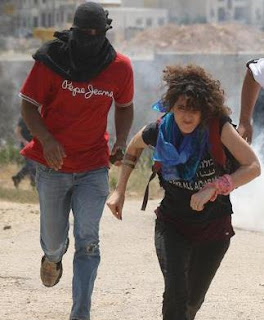 So there we have it. A system of alerts and pre-packaged tweets are sent out to anti-Israel activists around the world. With the mindless group-think of the Borg they blog and tweet and spam the web, hoping to bully an artist into submission. It gives the illusion of a mass- movement where one does not actually exist. Whenever a group like the Dervishes capitulates to the bullies, it increases the BDS'ers own delusions of their power and their importance.

And thats why we need to fight back.
Posted by Dusty at 12:51 PM

i dig your Borg reference :)

Ok, I'm going to call out some ignorance:

"As a Clinical Professor of Psychiatry and Global Health Sciences in the School of Medicine at UCSF Medical Center, Dr. Ghannam is clearly one of the one 1 %."

Ha! Do you know how much professors make?? I'll give you a hint - they're nowhere near the 1%.

Ghannam is a dick and I hope he eats shit and dies, but why falsely tar the rest of the professoriate, most of whom are not anti-Israel extremists?

Except that Jess also has an extremely lucrative private practice. Its not just the "teaching"