It ain't "Pinkwashing" if it's True 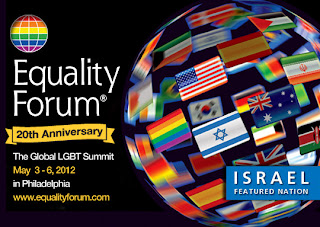 This one's for you, Dan:

For many, the highlight of the event was the appearance of Ambassador of Israel to the U.S. Michael Oren as Keynote speaker. From the Globes website:

"Oren mentioned three cases that highlight Israel's liberal attitude toward the LBGT community: two women IDF soldiers who harassed a lesbian soldier were sentence by a military court to prison; and an Israeli diplomat, who received a top posting in Europe, asked and received without further ado full rights for his partner; and the Israeli government did not capitulate to intense pressure from religious parties to cancel the Jerusalem Gay Pride parade, which was held to great success under heavy police protection.

"Our activists have faced many challenges, but they can build on a solid foundation of liberty," said Oren. "Today, Israel's LBGT community is part of the country's diverse and thriving social fabric. Together, we are soldiers, professors, legislators, judges, factory workers, members of the medical professions, and teachers. Together, we are not gays, heterosexuals, bisexuals, or transgenders, but proud Israelis."

Oren added, "In fact, two Palestinian organizations that are fighting for LBGT rights in the West Bank, operate out of Israel because they cannot operate freely in the Palestinian Authority."

Oren said that it is not difficult to be more liberal than Israel's neighbors, adding that Israel must be more advanced not only in the region, but in the world. "We must never cease our efforts to remove the remaining obstacles to total equal rights in Israel. We must ensure that these rights are guaranteed in law, and we must ensure that abuse at school, intolerance by certain religious circles, and public prejudice become unacceptable. Period," he said."
Posted by Dusty at 12:52 PM