A Picture is Worth a Thousand Words. Fauxtography as a Weapon to demonize Israel.

Its often been said that a lie can make it half way across the world before the truth even has a chance to put on its pants. The widespread and often deliberate spread of misinformation is backed up with fraudulent, faked or heavily edited photography. This practice became widespread during the second Lebanese war in 2006, and was dubbed "fauxtography" The IDF blog has featured a series on 5 Anti-IDF Lies Which Turned Viral.

This photo appeared on countless blogs- it was spread virally on Twitter and on Facebook. It was a fake. 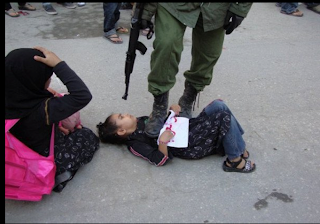 The real photo, uncropped, showed street theater in Bahrain. Of the bloggers that spread the false photo- very few issued a retraction. 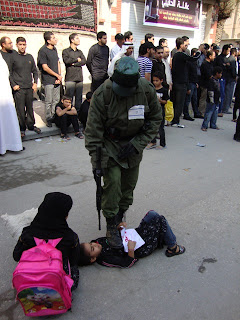 The IDF blog shows other notorious hoaxes, including strategically cropped Reuters photos from the Mavi Marmara, and the Mohammed Al Dura hoax- the blood libel that may have triggered the second intifada. It shows the recent Raja Abu Shaban hoax as well. The misinformation campaign started when a UN worker, Khulood Badawi, posted the photo on Twitter and claimed the three year old was killed during an IDF strike against Gaza. The young girl had actually died years earlier in a playground accident.

The IDF blog was not all-inclusive however. Photographic staging and manipulation was widely used during the second Lebanese war to sway public opinion and implicate Israel for targeting civilians. Remember this series of photos from Lebanon? Toys were removed from a suitcase and placed around a destroyed building- the photo was staged to give the illusion of a war crime. 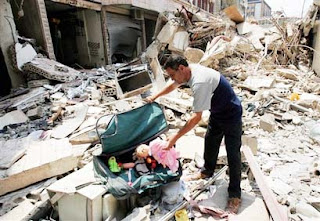 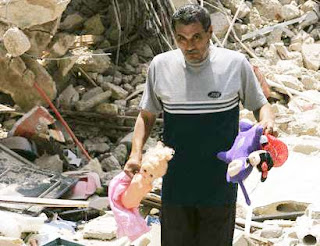 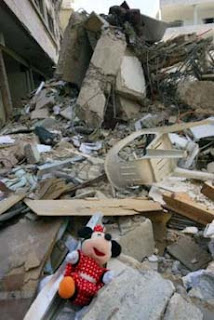 And of course, there was our friend Zombie's brilliant expose of the Red Cross Ambulance Hoax.

From the IDF blog

The following photo, taken by Mahmoud Zayyat, was published by AFP on April 17, 2012 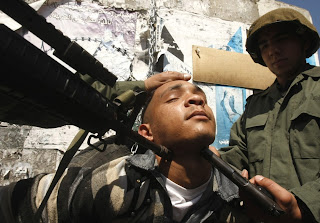 The photo caption is captioned:

“Palestinian refugees pose as Israeli soldiers arresting and beating a Palestinian activist during celebrations of Prisoners’ Day at the refugee camp of Ain el-Helweh near the coastal Lebanese city of Sidon on April 17, 2012 in solidarity with the 4,700 Palestinian inmates of Israeli jails. Some 1,200 Palestinian prisoners held in Israeli jails have begun a hunger strike and another 2,300 are refusing food for one day, a spokeswoman for the Israel Prisons Service (IPS) said.”

Fauxtography can take many forms:

1. Digitally altering photographs
2. Staging or posing scenes to be photographed and presented as real.
3. Giving false or misleading captions

The lesson? Looks can be misleading. The anti-Israel cru exist in a truth optional reality. Question everything.
Posted by Dusty at 6:35 PM

Here's an excellent vdeo for you to keep

PHOTO FRAUD IN LEBANON. This was during the last Lebanese war