The Truth optional World of the anti-Israel activist

One of the most consistent characteristics of the anti-Israel groups locally is how they ignore the endless provocation that leads up to the inevitable Israeli response.

On Tuesday, an unholy coalition from Al Awda, Jewish Voice for Peace, American Muslims for Palestine and allies are planning a protest  in front of the Israeli Consulate in Los Angeles to demand that Israel stop defending her citizens.

Not a single one of these groups condemned the endless barrage of rockets falling on Israel over the last few months, but the moment Israel responds, they take to the streets. 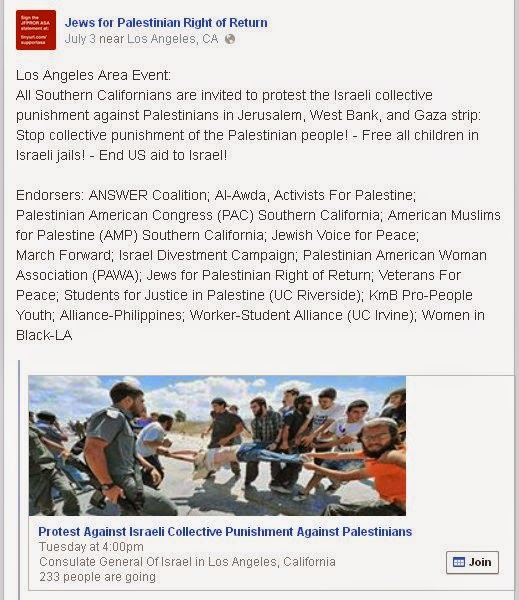 Interestingly, this truth-optional group has chosen to illustrate their action alert with a photo they purport as being an attack on a Palestinian youth from 2013, writing

08-12-2013: The child’s uncle, Mofeed Sharabaty, said that more than twenty Jews of the Beit Hadassah illegal settlement in the center of Al Khalil attacked Zeidan Sharabaty, 13 as he was heading to a nearby store.

The attack is one of hundreds of assaults carried out by Jews against Palestinians, their lands and property, especially in Al Khalil city (Hebron), as these illegal settlers also live in the heart of the city in Palestinian homes and property illegally occupied and confiscated.

Even though multiple people commenting on the post have explained to the moderators that the photo is from 2009, and portrays a Jewish youth,  the language has not been changed, and photo remains and is used to promote the Tuesday protest. 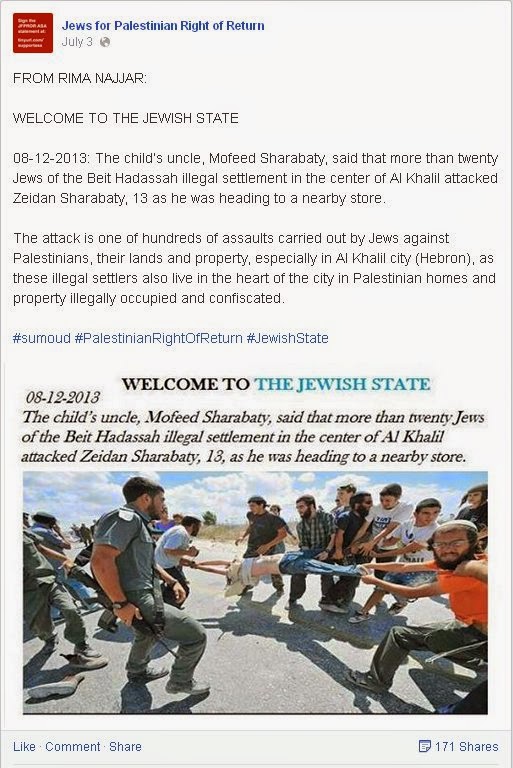 ironic that these leftist anti-Semites would be quick to write of FOX News as propaganda as if what they have to peddle is some how honest reporting. some times i don't know which is worse when it comes to the far right or far left.