Bay Area Anti-Israel rallies (and a bright ray of hope)

Once again, we see disgusting hyperbole and invective in the promotion of an anti-Israel rally scheduled for Sacramento, on Monday July 7. 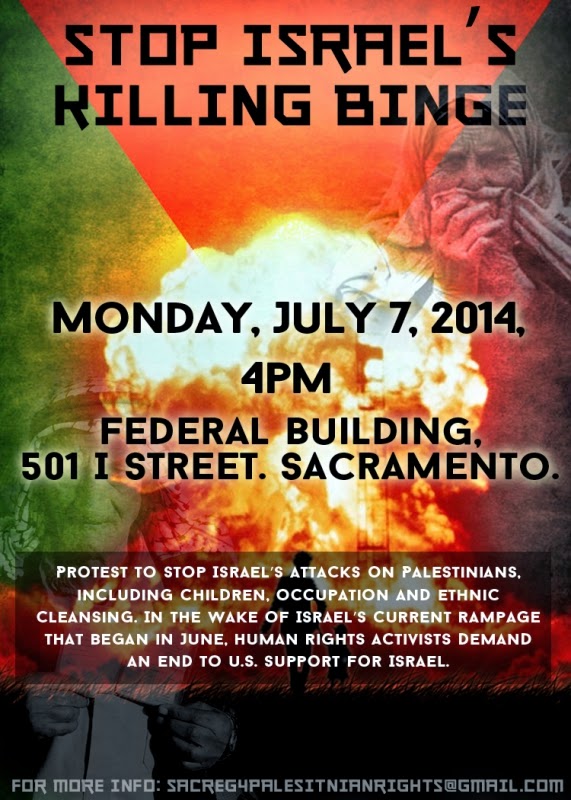 Its no better in San Francisco, where jihadists  proudly proclaim their desire for the destruction of the world's only Jewish state by promoting their demonstration "From the River to the Sea", to be held in front of the "Isra-hell" consulate. 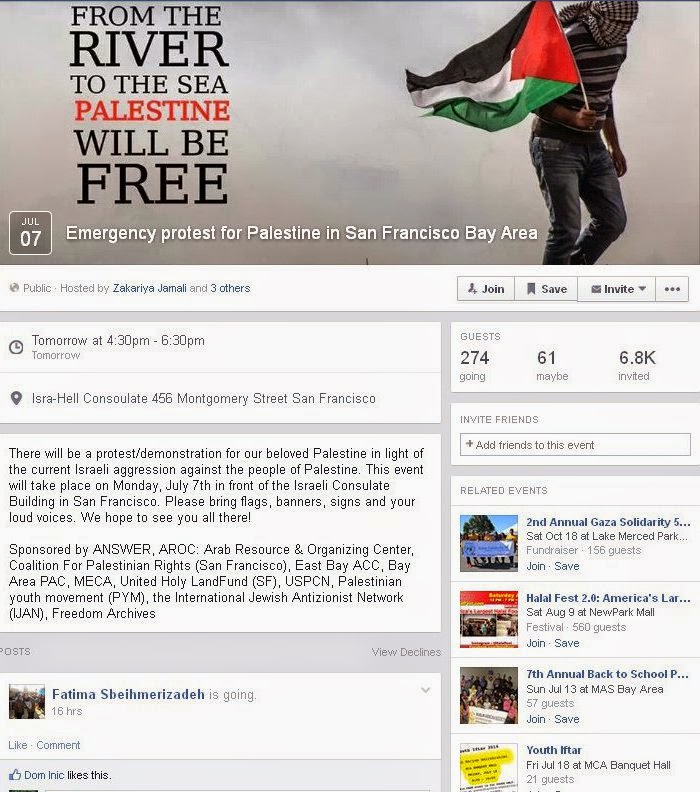 But there is a ray of hope, as Zionist organizations fight back.  From San Francisco Voice for Israel:

To all friends of Israel and the Jewish people:

YOUR PRESENCE IS NEEDED AGAINST THOSE PROMOTING HATE AND VIOLENCE AGAINST US.

This has been a difficult week for Israel, starting with the discovery of the bodies of Eyal, Gilad and Naftali on Monday, escalation of Hamas rocket attacks from Gaza against Israeli towns and cities, and now with violence in the streets of Israel by Arab extremists. Those who celebrate those events-- and call for more violence-- will rally in front of the Israeli Consulate on Monday, to protest any effort by Israel to protect its own citizens.

StandWithUs/SF Voice for Israel will be countering this demonstration by International ANSWER and its extremist allies, all of whom define "Israeli occupation" as the very existence of the Jewish state. ANSWER rallies in the past have featured graphic anti-Semitic imagery as well as signs and chants calling for more rockets, more terror, and more Jewish blood.

Our messages will be that Israel has the right to defend its citizens, that Hamas rocket fire must stop, and that the enemies of peace are those who promote ongoing war in pursuit of a "river to the sea" Arab state.

Logistically, we will not be able to bring a quantity of signs and flags, so please bring your own. We will NOT allow any signs calling for violence against Arabs or Muslims in general; just because the other side will engage in vicious hate speech does not mean that we will lower ourselves to their level. Anyone bringing such signs will be identified to the San Francisco Police as a provocateur from the other side and removed. A selection of very useful signs can be found at http://www.standwithus.com/signs/.

Please note that ANSWER rallies attract hard-core anti-Semites who have been known to engage in violence. We advise that those leaving the scene should not walk alone and should not engage verbally with any of the anti-Israel crowd. We also expect those on our side to follow any instructions from the San Francisco Police that might be issued for our safety.