Hamas responsible for childrens death at Shati and Shifa

Confirmed by an Italian journalist Gabriele Barbati: A misfired rocket from Hamas is responsible for the deaths of nine children at Shati and Shifa yesterday.

The Israeli army said it was not operating in the vicinity of Shifa Hospital in northern Gaza on Monday, where an explosion reportedly killed and wounded dozens of Palestinians.

“A short while ago Al-Shifa Hospital and Al-Shati Refugee Camp were struck by failed rocket attacks launched by Gaza terrorists,” the army said in a statement sent to reporters.

The failed attempt to fire the projectile apparently hit a car near the center, according to Israel’s Channel 2 News, causing the casualties.

The station said that a “Hamas Fajr-5 rocket aimed at central Israel, which was fired from a playground outside the Shifa hospital and exploded on the site causing casualties, had at least a 100 kg (220 lbs) warhead,” according to The Times of Israel.

This information was confirmed through IDF calculations 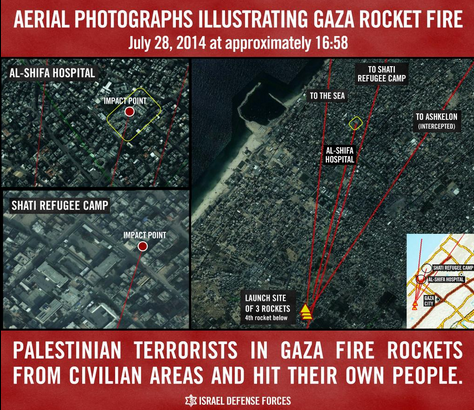 Since Operation Protective Edge has begun, Over 200 Hamas  rockets launched  have fallen short of their target and have terrorized the Palestinian people within Gaza
Posted by Dusty at 7:53 PM