After his article in Huffington post  I'm Done Apologizing for Israel went viral, with over 10,000 shares the progressive rabbi who describes himself as "a progressive American rabbi who leans left pretty hard. I've been engaged, as a US faith leader, in work to reform gun laws, extend LGBT rights around the world, grant refuge to illegal immigrants, protect women's reproductive choice, and more."  finds himself  the subject of a vile smear campaign on social media. 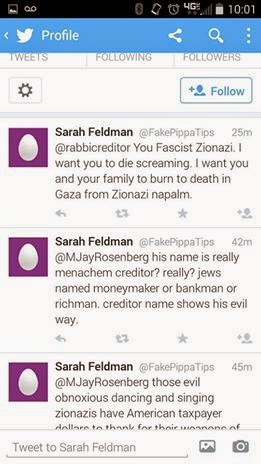 From what I suspect is a fake identity chosen  specifically because it sounded Jewish, the anti-semitic attack rages:

Just another example of the repulsive phenomenon of antisemitism hiding behind the acceptable fig leaf of anti-zionism
Posted by Dusty at 10:53 AM